Profiles in History,run by Joe Maddalena, announces new dates for their “Treasures from the Hollywood Vaults” auction in July. The auction will take place over four days beginning Thursday, July 26 through Sunday, July 29. July 26-27 will be Treasures from the Hollywood Vaults, July 28 will feature items from the esteemed Dreier Collection, and finally July 29 will be the Animation Auction. The Animation Auction will contain valuables such as a rare and significant Disneyland Prospectus, Walt Disney’s first motion picture camera and animations cels from beloved and now nostalgic classics. More below.

Discovered in an estate sale in the early 1980s was an important document drafted by Walt Disney and artist Herb Ryman to give words and images to Walt’s idea of a family fun attraction. This 1953 Disneyland Prospectus is one of only 3 supposedly produced personally by Disney and Ryman for Walt to take to New York and find a partner to invest $5 million to finance the building of Disneyland. Disney gave each of the three documents to a different banker in New York, but left without an investor. Since 1984, this particular Disneyland Prospectus has belonged to the same owner, collectibles expert and appraiser Gary Sohmers, who has done extensively research to determine the document’s rarity and importance.

It has been viewed by Dave Smith of the Walt Disney Archives and deemed authentic. The document includes an outer 9” x 12” folder featuring what appears to be rub on letterings for “DISNEYLAND.” Inside the folder are 9 typed pages describing Walt’s planned park with descriptions of the different “lands,” including some that never came to fruition such as “Lilliputian Land” and “Happy Holiday Land.” One page features only the following: “Walt Disney – sometime – in 1955 will present to the people of the world – and children of all ages – a new experience in entertainment. In these pages is proffered a glimpse into this great adventure – a preview of what the visitor will experience – Disneyland.” This is an extremely rare document in the history of Walt Disney and has never been reproduced in whole or in part. Although several sources on the Internet reference the document in research and company history, this is the only copy known to exist. Pictured at top, it is expected to fetch $80,000 – $120,000. 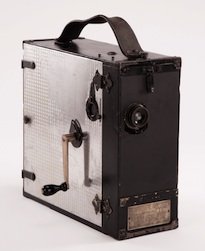 started Laugh-O-Gram Films, Inc. based in Kansas City in 1922. The company used money raised from stock to purchase equipment, including a used Universal camera. The company went on to produce a series of fairy tale cartoons including Little Red Riding Hood, Puss in Boots, Cinderella and in the spring of 1923, the Alice’s Wonderland series which combined live action and animation.

During the declining months, Walt and Red Lyon used the Universal camera to shoot news for Pathé and Universal newsreels. When Laugh-O-Gram went bankrupt, Rudolf Ising, Max Maxwell and Hugh Harman—fledgling animators at Laugh-O-Gram—purchased the camera and started their own studio under the name, “Arabian Nights.” These three animators later formed the core team at Warner Bros. animation studio, giving this hand-crank 35mm Universal Model A has an impressive lineage, starting with Walt Disney himself. Still in working condition, the camera has “Arabian Nights Cartoons Rudy-Max-Hugh” hand-painted in black on the left panel door. It is certainly worthy of inclusion in the finest animation collections and its importance cannot be overstated. Pictured above, the camera is expected to fetch $30,000 – $50,000.