When the catalog for the Goldin Auctions 2018 Winter Auction came out, collectors knew that there were potentially several record-setting items being offered. They were right. By the time the last bid was placed, records were smashed as nearly 1,100 lots of sports, entertainment and pop-culture memorabilia sold for $3.5 million, the most-ever for the company’s annual winter auction event.

The entire auction catalog with the prices realized is available at GoldinAuctions.com. In addition, Goldin Auctions is accepting consignments until March 6 for its Spring Premium Live and Catalog auction in April. Interested parties should contact info@goldinauctions.com.

To nobody’s surprise, the highlight of the night was a 2017 New England Patriots Super Bowl LI Championship Ring – Tom Brady Family Ring- with original presentation box and original Jostens’ “Brady” certificate selling for a record $344,927. The ring has 265 diamonds compared to the 283 that Tom Brady’s actual ring has and is slightly smaller than a player’s ring. The ring comes with a letter of appraisal from its maker, Jostens, for Brady.

The price was a record for a football ring, surpassing Lawrence Taylor’s Super Bowl XXV ring which sold for $230,401. The only piece of sports memorabilia from the past 25 years to sell for more, was Mike Piazza’s historic post-9/11 home run jersey which was sold privately by Goldin Auctions to Anthony Scaramucci and others for $365,000. 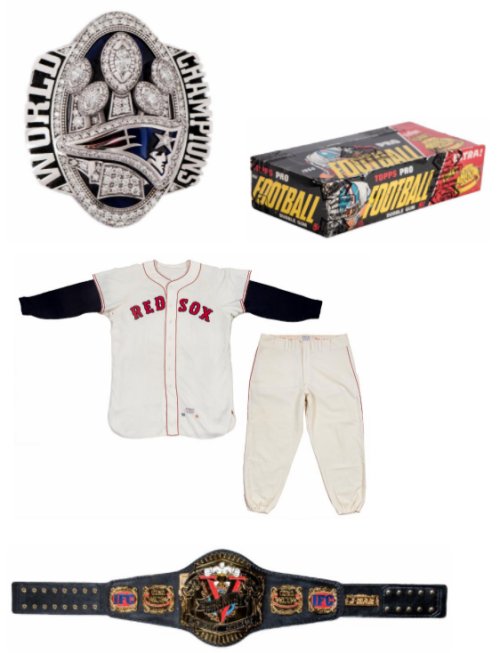 “The extensive marketing and publicity that we are able to create surrounding high-profile and record-setting items expands our customer base and brings new people into the industry. This helps grow the industry and directly benefit our consigners,” said Ken Goldin, Founder of Goldin Auctions.

The holy grail of UFC memorabilia, the Original UFC V Superfight Championship Belt, created for the April 7, 1995 Royce Gracie vs Ken Shamrock fight, which sold for $44,190, set a record for the highest price ever paid at auction for UFC memorabilia. In fact, the sale price is even more impressive when you realize that it fell just one bid short of surpassing Mike Tyson’s 1987 WBA Heavyweight Championship Belt which Goldin Auctions sold for $49,800.

Here are some of the auction highlights and final prices realized. For more details, visit GoldinAuctions.com.