Collectors will have a rare opportunity to bid on Heritage Auctions’ largest compilation of space-flown, signed and collectible space-related memorabilia — including the space-flown Apollo 13 Command/Service Module Launch Checklist book (est. $30,000) signed by astronauts Jim Lovell, Fred Haise, and Jack Swigert upon their safe return. In addition to artifacts from various explorations, the Nov. 11 Space Auction offers original artwork by astronaut Alan Bean, whose depictions of his time on the surface of the moon have been exhibited around the country.

“This collection offers some exceptionally rare lots, items that were received directly from astronauts who have flown or been involved in Apollo missions,” Heritage Auctions chief cataloger and space historian Michael Riley said. “Historic Items in this auction are the kind that really can take your collection to the next level.”

Among the top lots available in the auction will be the CSM Launch Checklist, which was prepared and managed by NASA’s Dennis Bentley. After the mission’s crewmen autographed the checklist that helped get them safely home following the perilous mission, Haise presented the checklist to Bentley, who has kept it in his private collection ever since. 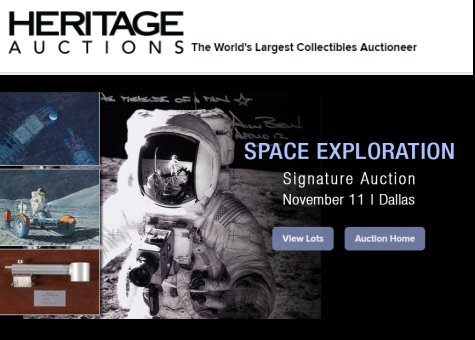 Also available is the Quarantine Cover, C-2, that was flown on the Apollo 11 mission to the moon – the first manned lunar landing – and signed by crewmembers Neil Armstrong, Michael Collins and Buzz Aldrin. Featured on the cover is an “Apollo 8” stamp, valued at 6 cents and cancelled Aug 11, 1969, in Webster, Texas. When Apollo 11 returned to Earth July 24, 1969, the equipment and astronauts from the spacecraft were quarantined; when the cover was released from quarantine, it was taken to the nearest post office (Webster is less than three miles from NASA’s Houston headquarters) for cancellation, after which it became a part of Collins’ personal collection. 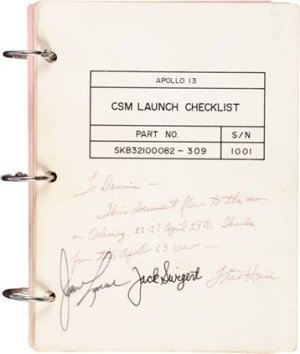 Other top lots include a pair of paintings, each measuring 18 inches by 24 inches, by astronaut Alan Bean, the fourth person to walk on the moon as a member of the Apollo 12 mission in November, 1969. “Our World At My Fingertips” was completed in 2005 and was on exhibit at the Butler Institute of American Art in late 2005 and at the Cosmosphere from 2006 until now, making this auction the first time this stunning work ever has been offered to the public. Bean actually incorporated moon dust into the paint he used to complete “Our World at my Fingertips.”

“Within this painting are actual particles of the space ship I flew to the moon, some charred black with reentry heat, and minute amounts of moon dust that coated my spacesuit,” Bean said.

In 1984, Bean painted “Test Drive,” which shows Apollo 17 astronaut Gene Cernan driving the lunar roving vehicle on the moon soon after it was extracted from the Challenger lunar module. “Test Drive” has been in a private collection for more than 20 years.

Bruce McCandless II is a former astronaut, American naval officer and aviator and electrical engineer. A member of the Apollo 14 support crew and “CapCom” (capsule communicator), McCandless was presented with a Brush-Scriber-Lens Tool that was flown in the lunar module and carried on the surface of the moon. It has been in his personal collection since 1971.