Rare items accompanying astronauts in outer space and on the moon highlight Heritage Auctions’ Space Exploration sale May 19 when an Apollo Guidance Computer Display and Keyboard is expected to sell for $60,000 and an Apollo 12 Lunar Module Flown Waist Tether is expected to bring $35,000.

“This auction offers a number of rare and seldom-offered items from both the American and Soviet Space programs,” said Michael Riley, Director of Space Memorabilia at Heritage Auctions. “The fact that many pieces came originally from the personal collections of the astronauts and cosmonauts themselves makes this a perfect opportunity for collectors.” 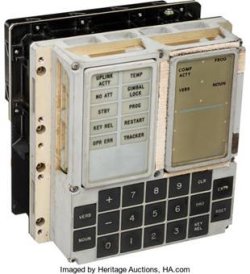 “We are particularly proud of the selection of rare relics we have assembled that trace Soviet and Russian Space history from its literal beginning with the launch of Sputnik to more recent International missions,” Riley said. “From the archives of a prominent Soviet engineer, we have the Official World Record Claim for the Sputnik 1 Satellite, the launch that started everything in motion (est. $3,000). A document often referred to as the Space Magna Carta (est. $30,000), was flown  and signed by both crews during the Apollo-Soyuz Test Project, a 1975 mission that marked the start of the long road to cooperation in space between the U.S. and Soviet Union, a significant watershed for the end of the Cold War ‘Space Race.’ Our offering is one of only four that was signed upon that historic occasion.”

A number of special pieces should appeal to collectors of Apollo space hardware. The above-mentioned  Apollo Guidance Computer Original Display and Keyboard (DSKY) Unit (est. $60,000) is the same device that was used on every Apollo and Skylab mission for onboard guidance and navigation. An Apollo Lunar Module Reaction Control System Rocket Engine (est. $16,000) is the same as was used on both the Apollo Service and Lunar Modules for attitude control.  A 12-inch Titanium Helium Storage Tank was another important part of the Lunar Module Reaction Control System and is expected to bring $6,000.