An oversized flag flown on Apollo 11 soared past pre-auction expectations, selling for $187,500, boosting the total return in Heritage Auctions’ May 11 Space Exploration Auction to $1,150,796.50.

The Apollo 11-Flown Large Size American Flag on a Crew-Signed Presentation Certificate, Framed, which carried a pre-auction estimate of $50,000-75,000, was the target of spirited bidding. Not only is it mounted on a certificate bearing the signatures of astronauts Neil Armstrong, Buzz Aldrin and Michael Collins, it also is unusual in size. Most mission-flown flags measure 4 inches by 6 inches; this one measures 8 by 12 inches.

“The flag is an extraordinary lot, and our collectors knew it,” Heritage Auctions Space Exploration Director Michael Riley said. “We believe it is the first time such a flag ever has come to auction, and the collectors who bid on it knew they were going after a very important piece of space history.” 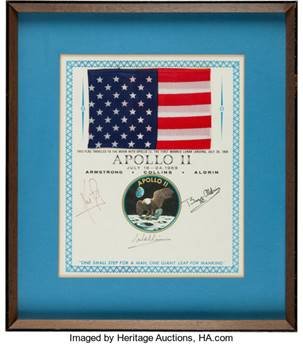 An extremely rare Apollo 13-Flown Gold Robbins Medallion Originally from the Personal Collection of Mission Command Module Pilot Jack Swigert, with LOA also went well beyond its pre-auction estimate before finishing at $87,500. Only six were produced – two for each member of the three-man crew. The dramatic design features three of Apollo’s chariot horses flying toward the moon with the slogan Ex Luna, Scientia — which translates to “from the moon, knowledge.” This is the first gold Apollo Robbins medal that Heritage ever has offered at auction.

One of the most unique items in the auction was a NASA Apollo Three-Seat Crew Couch Complete with Head Beam Assembly and Left & Right Hand Stabilizer Beams, Manufactured by Weber Aircraft in 1968 that realized $55,000. Heavy bidding for the exact seats that could have flown as part of an Apollo Command Module drove the final price to more than four times its high pre-auction estimate of $12,000.

An Apollo Lunar Module Reaction Control System Marquardt R-4D Rocket Engine with Extended Nozzle, Manufactured in Early 1971 sparked multiple bids before bringing $47,500. Multiple collectors bid on a chance to own one of 16 such engines that were mounted on the exterior of each Lunar Module in four quadruple clusters; 16 also were mounted on each Service Module.

An Apollo 11-Flown Silver Robbins Medallion, Serial Number 405, Originally from the Personal Collection of Mission Lunar Module Pilot Buzz Aldrin, with Signed LOA sold for $47,500. It is one of 450 flown aboard Apollo 11, the first manned moon landing, July 16-24, 1969 with crew members Neil Armstrong, Buzz Aldrin and Michael Collins. This is one of, if not the only, major official item that renders the insignia with an eagle carrying an olive branch in its mouth as it was meant to be by the astronaut designer. The reverse features the dates of the mission, surnames of the crew, and the serial number.

Among the other lots that performed exceptionally well in the auction were a group of 30 lots from the Family Collection of astronaut Richard Gordon, including: