The 20th century was unmatched in terms of advancements in science. Landing on the moon and the theory of relativity lead the way in that department and we are proud to offer artifacts in relation to these enormous feats. An Autographed New York Times by the Apollo 11 team and a letter written shortly after World War II by Albert Einstein showing his humorous side in reference to his relationship with God and an invite to attend Rosh Hashanah Services on 9/26/46 are up for bids in the Goldin Auctions 2019 October Legends Auction now through October 19th at GoldinAuctions.com.

This iconic edition of “The Times” reads “MEN WALK ON MOON” with the subhead “Astronauts Land on Plain; Collect Rocks, Plant Flag”. It hangs in restaurants, bars, offices, and museums around the world and this is a once in a lifetime chance to own an original copy penned by the legendary crew. Although 50 years old, the newspaper is in very good condition and will be the prize of any collection of historically significant memorabilia. 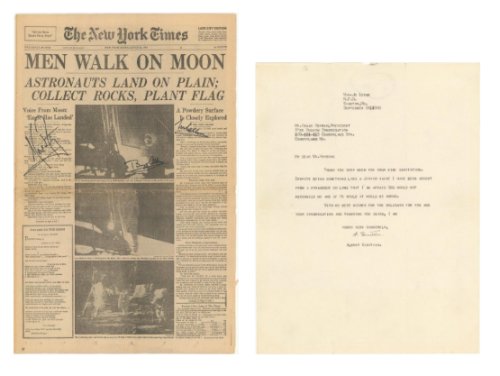 Content is everything in the collectibles world when it comes to letters and Einstein certainly brings his “A Game” in this case. Dated September 24, 1946, Einstein has written, “Thank you very much for your kind invitation. Despite being something like a Jewish saint I have been absent from a synagogue so long that I am afraid God would not recognize me and if He would it would be worse.” He then signed “A. Einstein” in black pen. An Einstein letter regarding God and Judaism are of exceeding rarity and are highly desirable.

“There are only a handful of people and events over the last century that can be referred to as iconic.” said Ken Goldin, Founder of Goldin Auctions. “Not many items blow me away after a lifetime in this business but a letter from Einstein discussing his faith and a signed New York Times Man on The Moon edition are items to behold. We are looking forward to seeing them go to the right collectors who will recognize their worth and historical significance.”

About Goldin Auctions:
Sports memorabilia impresario Ken Goldin has sold more than $700 million in memorabilia from many of the biggest names in sports, history and pop culture and was the pioneer of using the medium of television to sell sports memorabilia. Over the past few years, Goldin Auctions sold a Honus Wagner T206 card for a public sale record $3.12 million, Babe Ruth’s 1918 contract for a record $1.02 million, the Mike Piazza Post-9/11 home run jersey for $365,000, and the 1979-80 Wayne Gretzky PSA GEM MT 10 rookie card for a record $465,000. Goldin Auctions strives to break new ground and offer collectors the best in collectible treasures up for auction in the marketplace.