This is an absolute score for lovers of both baseball and photography: On Nov. 18, Heritage Auctions will proudly present extraordinary archives of camera negatives documenting the history of America’s national pastime. This auction’s moniker – A Century of Greatness – is almost an understatement: Not only does this auction’s roster feature most of baseball’s titans and immortals on and off the field, but they’re captured by, among others, George Burke and Charles M. Conlon, photographers whose images defined the sport’s golden years.

This auction of archives stretches from the Deadball era, when Babe Ruth was calling his shots and Ty Cobb was racing the bases spikes up, through the 1970s, when Willie Mays was heading back to New York and Rod Carew was chasing Ted Williams’ .400 batting average. The photos are in black and white and, occasionally, resplendent color: In a single lot, you will find Mickey Mantle beneath a brilliant blue sky with hands on hips and bat in hand and posed alongside teammate and fellow history-maker Roger Maris. Here, too, is Jackie Robinson with lumber perched over his right shoulder; and The Left Arm of God himself Sandy Koufax, mid-windup, a whirlwind whose curveball spun like a heater. 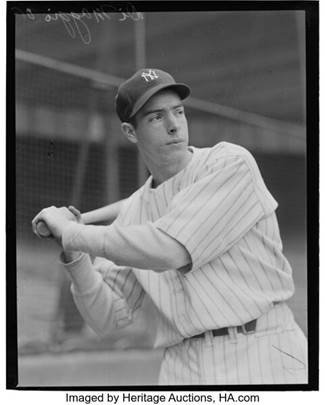 Early portraits on glass and acetate safety film dominate this auction, which features an earlier style of portraiture, particularly by George Burke, the Chicago photographer whose portraits, candids and posed photos defined the sport for those who’d heard the names on the radio but couldn’t witness their greatness in person.

Here, collectors will find a nearly unprecedented archive of more than 1,200 of Burke’s 5-by-7-inch negatives. From 1929 to 1948 he photographed visiting teams in Chicago, and captured the likes of Ruth, Lou Gehrig, Joe DiMaggio, Dizzy Dean, Bob Feller, Jimmie Foxx, Hank Greenberg, Rogers Hornsby, Carl Hubbell and more. He caught Gehrig in the clubhouse with a beaming glance out into the field; and photographed Ruth in 1935 in a Boston Braves uniform, watching one of his final home runs leave the ball park.

Burke was the George Hurrell of baseball photographers and his hand-retouched negatives are highly coveted and produce refined and beautiful prints. Later color photography is featured in the largest archive, too, and features action photography where you can see Brooks Robinson reaching for a line drive and Hank Aaron launching another long ball into the stands.

This could be the last significant archive of its kind to be offered for public sale.

Also offered is a large archive of more than 640 rare glass camera negatives taken through 1941 – among them a beautiful group of Brooklyn Dodgers portraits by the pioneer of baseball photography Charles M. Conlon.

Here, too, is an even larger, comprehensive archive of more than 3,600 negatives from 1941 through the late 1970s consisting of black-and-white safety film and color transparencies. The offerings here transition and transport us from the golden age to the modern era – when relocation and expansion transformed the game, when the Baltimore Orioles and New York Mets and Minnesota Twins joined the majors. Not even the internet has room enough for us to catalog the names here, but suffice it to say every one is a Hall of Famer – from Aaron to Yastrzemski and enough names in between to make you a little Dizzy.