Beginning Monday November 1st with the opening bids that will be placed in Mile High Card Company’s Fall auction, the proverbial curtains are sure to be lifted off one of the most extensive offerings of rare and high grade sports collectibles to be offered at public auction in quite some time. Serious baseball collectors have come to know MHCC for their impressive offerings of sports cards and look forward to their catalog auctions with the fervor and passion that makes the hobby such a treasure. With that said, Mile High Card Company has surely gone beyond the norm and raised the bar with their current auction.  The complete listing of the contents of the auction-which opens November 1st and closes November 18th-will be available online at www.milehighcardco.com and, of course, the company can be reached by phone at 303-840-2784.

Brian Drent, President of Mile High Card Company, stated, “As with all of our sales we are exceptionally pleased with the items being offered within the catalog, but I assure each one of our customers the depth and quality of the material being offered in this auction astounds even me. From the amazing 1914 Cracker Jack set to the scintillating condition of the 1933 Goudey set that will be broken up and offered as singles, it really is a tremendous auction that we are all very proud to be able to offer to all serious collectors.”

Headlining the auction is the stupendous 1914 Cracker Jack #1 All Time Finest Set on the PSA Set Registry that abounds with single highest graded examples and is buoyed by an impressive 6.59 GPA that has allowed the set to be ranked as the number one all time finest set for the last nine years. The 1914 Cracker Jack set is known throughout the hobby as one of the crown jewels in terms of card collecting; with its amazing player selection as well as bright bold graphics, the cards have long been looked upon by advanced collectors as a crowning achievement. The offered set is incomparable in terms of condition, with most of the paper-thin collectibles residing in the highest known grade from PSA. No matter the bank account or the time allotted to the collecting interest, one would be hard pressed to ever surpass the dizzying heights of the featured set. Mile High Card Company will offer the set in two fashions: first, the set will be offered in its entirety and secondly the set will be broken up as individual cards with the highest aggregate bid determining the final sale format.

As if the sale of the Cracker Jack set wasn’t enough, enthusiasts will be exceptionally appreciative of the amazing high grade 1933 Goudey Complete Set that will be broken up and offered in the auction. Mile High Card Company is pleased to announce that it will be breaking up the #5 All Time Finest 1933 Goudey Set of all 240 cards including the exceedingly rare #106 Napoleon Lajoie which has been graded PSA NM/MT 8. The set will be sold as individual lots and offers an awe-inspiring 7.98 overall GPA with each and every one of the cards graded NM/MT 8 or NM/MT+ 8.5 by PSA save for a mere seven commons. That’s right-each of the four Babe Ruth cards has been graded NM/MT 8 by PSA, as well the Gehrig cards are graded NM/MT 8 and NM/MT+ 8.5! A tremendous opportunity for any high grade collector of this prestigious set!

Baseball surely isn’t alone in representation in the auction as Football, Basketball and Hockey are featured with exceptional material as well; the following are some of the highlights from those sports. The Fall MHCC auction is buoyed by a bevy of cardboard highlights from the gridiron including the following: a 1935 National Chicle #1 Dutch Clark PSA NM/MT 8, a stunning 1951 Bowman #20 Tom Landry rookie card that has been graded GEM MINT 10 by PSA, as well as a rare 1953 Bowman #96 William Cross PSA MINT 9, a rarely offered 1958 Topps #62 Jim Brown rookie that has been graded MINT 9 by PSA, a stunning collection of 1955 Topps All Americans all graded MINT 9 by PSA including the Four Horseman, Rockne, Graham, Luckman and many more, not to mention the sale features an astounding 1966 Topps #96 Joe Namath graded GEM MINT 10 by PSA. Hockey cards are always a big part of the MHCC auctions and this event is no different as it includes a tremendous selection of high grade Hockey highlighted by the following: a stunning rare 1924 Champs Cigarettes King Clancy PSA NM/MT 8 which is a one of one and the highest graded example, as well a 1966 Topps #35 Bobby Orr PSA NM/MT 8 is offered, and without question one of the most anticipated Hockey offerings in quite some time is made, when a 1966 Topps USA Test #35 Bobby Orr PSA NM/MT+ 8.5 highest graded one of one comes to the auction block!

Although Mile High Card Company has built its reputation by offering the most prized cardboard in the auction arena, the featured auction is also loaded with select presentations of exceptionally desirable memorabilia, highlighted by an incomparable 1955 Rookie Year “Momen” Clemente Game-Used Louisville Slugger that has been graded PSA GU9. The auction also features a stunning exceptionally high grade Single Signed Babe Ruth (OAL-Harridge) Ball authenticated by JSA; also featured is an amazing Babe Ruth signed photo to a former teammate that has been graded PSA/DNA 10! A 1927 photo of Babe Ruth, Lou Gehrig and Christy Walsh signed by all three from their barnstorming tour, authenticated by both PSA/DNA and JSA, and a 1942 ball signed by the entire cast of “Pride Of The Yankees” including Babe Ruth that is authenticated by PSA/DNA also appear in this auction.

“ Without question , I believe this auction will be the finest offering of high grade cards in this fall auction season, and we are all exceptionally excited to be able to offer the material to the collecting community” Drent said. “I really encourage all enthusiasts to go to our website at www.milehighcardco.com where they will be able to view enlarged images through both our auction software as well as our e-catalog that will link directly to each lot, allowing for bids to be placed right from that platform as well as the traditional auction site”. Mile High Card Company will be alerting their customers with up-to-the-minute updates at Twitter.com/MileHighCard as well as on their Facebook page at: Mile High Card. The complete listing of the contents of the auction-which opens November 1st and closes November 18th-will be available online at www.milehighcardco.com and, of course, the company can be reached by phone at 303-840-2784. 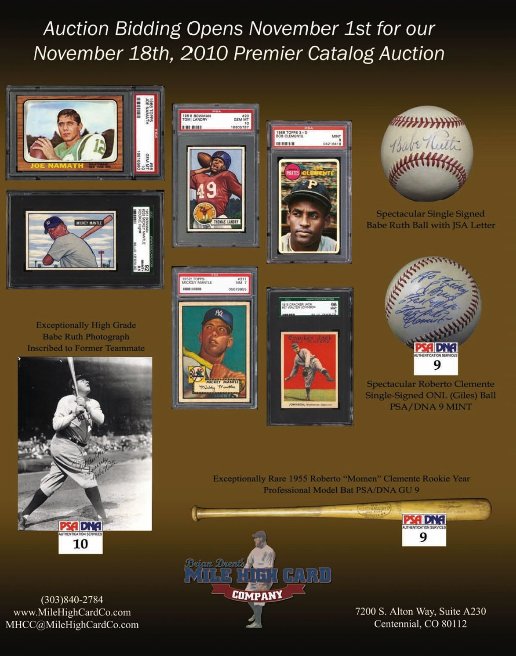 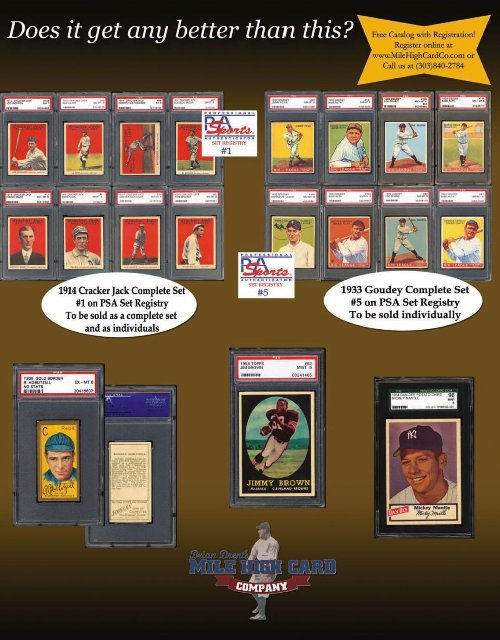