The Babe is still a crowd pleaser. When bidding came to a close in the early morning hours of Sunday, five of the top eight lots in Memory Lane’s Sets and Set Breaks Auction featured the familiar countenance of Babe Ruth. From a 1916 rookie card to high-grade examples of some of the final gum cards of his career, the Bambino was once again in demand.  The top selling card was a PSA 8 1933 Goudey #149 that sold for $510,000. Only two other examples rank higher–and not by much as each of those carry an 8.5 grade. (Full results are available on Memory Lane’s website.)

Not behind was card #144 from the same high-grade set. The card showing a full length image of Ruth also carried a PSA 8 grade and netted $436,736 including the buyer’s premium added to all winning bids.

The cards were all part of a 1933 Goudey Baseball near set that was among the headliners in the auction and featured three of the four Ruth cards and a Lou Gehrig, all in high grade. Ruth card #181 also sold for a six-figure price, closing at $256,736, while the Gehrig netted $157,906.

The consignor of the Ruth rookie is the granddaughter of the card’s original owner, who became fascinated with the photos of baseball greats and worked to accumulate a near set of the M101-5 cards, which have been in the family ever since.

A 1933 Goudey Sport Kings Ruth graded PSA 8 (only three higher) drew a crowd of interested bidders before the hammer fell at $193,295.

The auction featured one of the biggest accumulations of high grade iconic sets, near sets and unopened material offered in the hobby this year. In all, the auction generated over $8 million in sales. Bidding began on November 20.

Basketball collectors had a chance to snare one of the sport’s top vintage cards. Collectors and investors battled over a 1957-58 Topps Bill Russell rookie card graded PSA 8 before the hammer fell at $229,295.

A rookie card of Russell’s long-time Celtics teammate Bob Cousy from the same set went for $45,007. 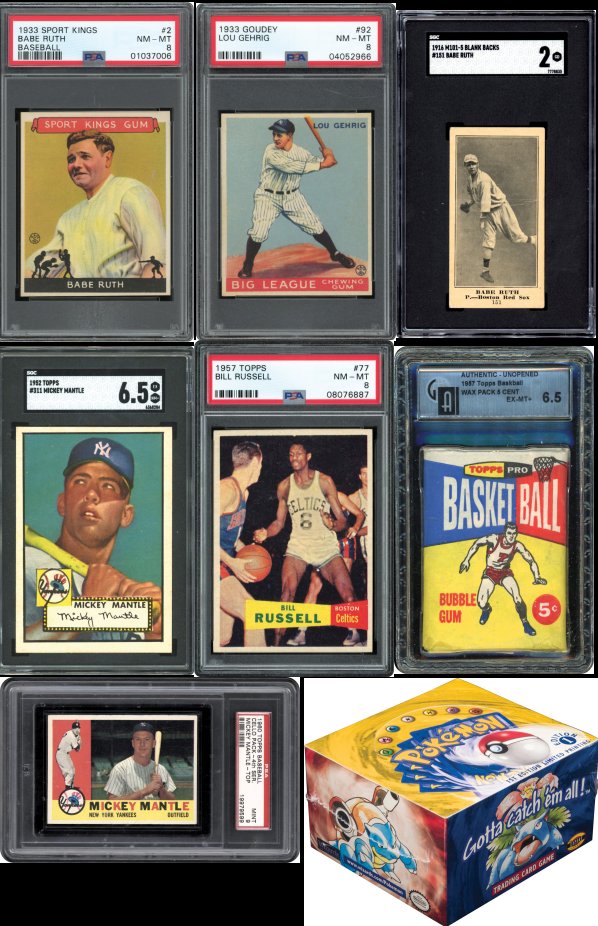