Babe Ruth continued to prove he was the king on and off the field as his 1916 M101-5 Blank Back (Sporting News) Babe Ruth Rookie #151 PSA NM 7 baseball card sold for $552,000 to lead Heritage Auctions Sports Collectibles Auction which concluded Saturday night after extended bidding. The May 11-13 thee-day auction saw collectibles from the most historic names in sports sell for impressive values as the total price realized for the auction reached nearly $10 million. 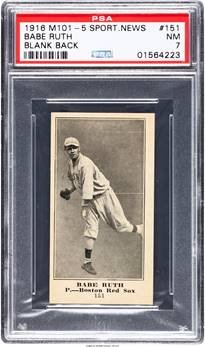 The 1916 M101-5 Blank Back (Sporting News) Joe Jackson #86 PSA NM-MT 8 sold for more than double its pre-auction estimate fetching  $84,000 which was the same price the 1933 Goudey Lou Gehrig #92 PSA NM-MT+ 8.5 realized. A 1907 Seamless Steel Tubes Post Card Ty Cobb Rookie that featured a Cobb handwritten and signed baseball-related message that was authenticated and encapsulated by PSA/DNA rocketed past its $10,000+ pre-auction estimate and sold for $84,000.

A trash to treasure garage sale under purchase 1976 Thurman Munson World Series Game Four Worn New York Yankees Jersey sold for $78,000 in its first appearance at auction.  Bought in the tri-state area the jersey was worn by a band as a Halloween costume before being photo-matched and authenticated as game-worn during Game Four of the 1976 World Series.

Additional auction highlights include but are not limited to: