One of the finest known SGC copies of Babe Ruth’s 1916 M101-5 Blank Back rookie card headlines next month’s Memory Lane Winter Rarities Auction, one that also includes some fresh-to-the hobby finds and thousands of in-demand vintage and modern cards.  The SGC 5.5 Ruth card stands alongside only two other examples as the highest rated M101-5 Blank Back copy authenticated and graded by SGC. It carries a $150,000 opening bid. Registration is open with the auction scheduled to open on January 28 and run through February 19, 2022 on Memory Lane’s website.

This is the fourth consecutive Memory Lane catalog that has featured a Ruth rookie.  In July of last year, an M101-4 Ruth graded PSA 6 made headlines when it sold for $1.5 million.

The auction is populated by numerous Ruth cards, autographs, photos and other memorabilia. A rare mid-1920s arcade card—one of only six known to exist—is also expected to draw interest from advanced collectors.

Another rarity is the recently discovered 1927 Babe Comes Home Theatre banner. Discovered in the upstairs closet of an Illinois home, the approximately 3’ x 10’ foot banner was exceptionally well preserved and had been in possession of the same family since it was shipped to a local theater nearly 95 years ago.

From the same time period comes an 8” x 10” barnstorming photo of Ruth and Lou Gehrig, autographed by both.

The auction also includes Ruth and Gehrig autographs on baseball cards—part of a remarkable group of 229 different 1933 Goudeys—just 11 short of a full set—painstakingly collected over more than 20 years by a New England collector.  Many are one of a kind or one of only a couple of signed copies known to exist.

Those who appreciate card collecting history will enjoy images of a 1911 Sporting Life (M116) Christy Mathewson card graded PSA 8 that comes with the mailing envelope, addressed to the original recipient of the sports publication’s promotion, launched 111 years ago this coming season.

Among the freshly uncovered finds making their auction debut through Memory Lane’s sale is one of only two graded copies of the 1913 Colgan’s Chips Tin Tops Jim Thorpe and a lower grade copy of Joe Jackson’s 1909 American Caramel rookie card, both part of a single owner collection from long ago that are being offered for the first time.

On the 50th anniversary of what would be the start of his final spring training, Roberto Clemente’s career is captured in a special collection of cards and memorabilia.  Consisting of 40 lots, the group includes a signed Clemente check, five 1955 Topps rookie cards and numerous rare issues.

One 17-page section of the catalog focuses on over 90 key rookie and star cards carrying PSA 10 grades from a variety of years starting in the 1960s, topped by Juan Marichal’s Topps rookie card.

As with every Memory Lane auction, there’s a run of high-grade cards from the career of Mickey Mantle as well as copies of his 1951 Bowman rookie and 1952 Topps card.  High-end examples featuring other greats include a PSA 9 1968 Topps Nolan Ryan rookie card and the highest graded copy of Stan Musial’s 1949 Bowman rookie.

Those who love unopened product won’t be disappointed with several pages of vintage graded packs dating back to the 1960s as well as authenticated unopened boxes including Fleer Basketball, 1972-73 and 1980-81 Topps Basketball,  and 1974 Topps Football.

Several pages of autographed items and other memorabilia are also part of the sale including possibly the only original 1988 Apple II Madden Football Game signed by the legendary late NFL coach and broadcaster.

Registration is open with the auction scheduled to open on January 28 and run through February 19, 2022 on Memory Lane’s website. 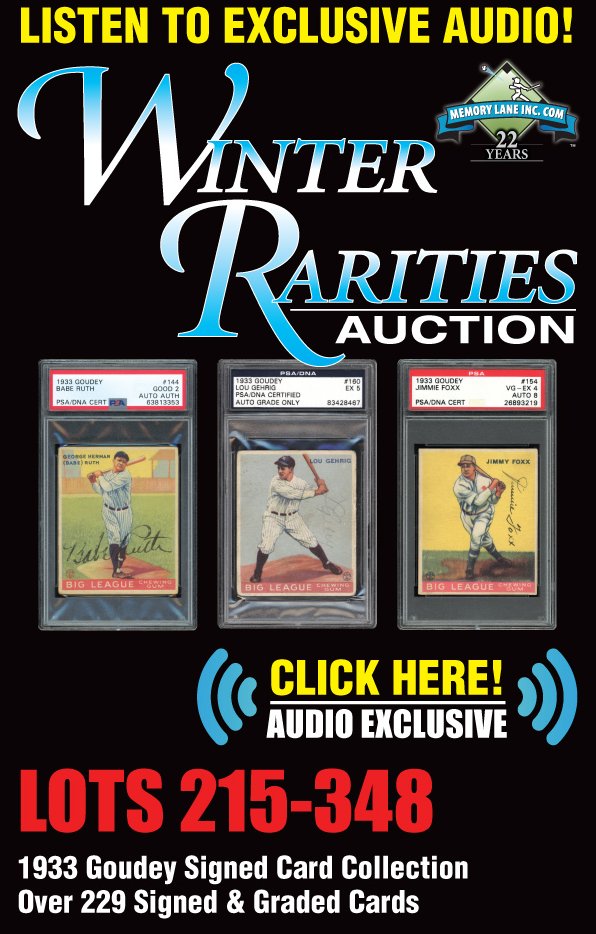