In our Fall Premier Auction set to open November 27th, SCP Auctions is offering one of the most jaw-dropping items in baseball history: Babe Ruth’s 500th career home run bat! On August 11, 1929, the Great Bambino became the first player to reach the 500-homer plateau, establishing the career benchmark by which all power hitters are measured. Long believed to have been lost to time and history, the monumental discovery was actually gifted by Ruth in the mid-1940’s to one of his dearest friends, Jim Rice, the former mayor of Suffern, New York, whose frequent outings with The Babe are well-documented. 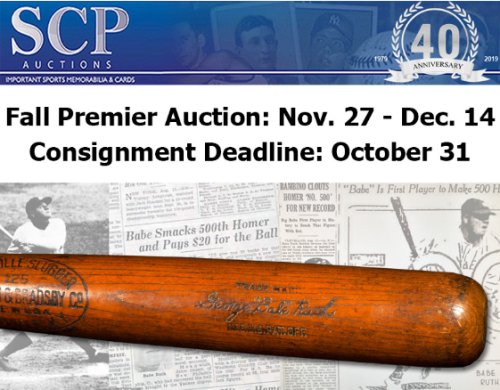 The bat had been quietly stored by Rice’s family for nearly 75 years until now. This year marks the 90th anniversary of the historic clout and SCP Auctions is honored to unveil the milestone piece of lumber to conclude its 40th anniversary as a leader in the hobby. For more information, visit www.scpauctions.com.