Many baseball fans know that Babe Ruth hit the first regular season home run at Yankees Stadium on Opening Day – April 18, 1923. What most fans do not know is that the Babe actually hit his “first” home run at the new stadium on February 14, 1923 when he put on a hitting display for New York Daily News reporters to demonstrate the Stadium’s short right field porch.

A baseball hit by Ruth that cold February day and signed for the Stadium construction worker who retrieved it, has been consigned for auction by legendary sports memorabilia curator Joel Platt into the Goldin Auctions Babe Ruth Centennial Auction, scheduled for July 12, 2014 at the Babe Ruth Birthplace & Sports Museum in Baltimore. An online auction of 1,000 additional lots of sports memorabilia will close on July 13, 2014 at www.GoldinAuctions.com. 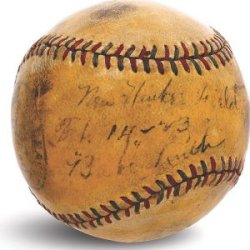 Platt acquired the baseball and learned of its story more than 50 years ago from the construction worker who retrieved the baseball from the newly completed right field stands at Yankee Stadium. Since the stadium had not yet been named “Yankee Stadium,” the ball is signed and inscribed by Babe Ruth — “New Yankee Field Feb 14-23 Babe Ruth.” It features a distinctive mark where the ball was struck and is authenticated by PSA/DNA and JSA and comes with a Sports Immortals Letter of Authenticity.

While doing research for the auction, Goldin received confirmation of Babe’s accomplishment when he stumbled upon the story of that February day in 1923, in Leigh Montville’s book, The Big Bam: The Life and Times of Babe Ruth. The book was published in 2006, almost 50 years after Platt first heard the story from the construction worker.

“When Ken Goldin talked to us about the Babe Ruth Centennial Auction, we recognized he was putting something together truly historic that would have incredible reach throughout the world, not just to collectors but to all baseball fans,” said Platt, Chairman and Founder of The Sports Immortals Museum in Boca Raton, Fl. “Babe Ruth has a tremendous fan and collector base, even 65 years after his passing. Since we have several hundred Babe Ruth items in The Sports Immortals Collection, we saw this as a unique opportunity to share one of the most treasured Ruth mementos with the rest of the world. The Babe was my inspiration 71 years ago to start Sports Immortals, and we are happy to contribute one of the worlds’ most significant and historic Ruth and Yankee collectibles to this special event.”

The Goldin Auctions Babe Ruth Centennial Auction will include both a Live Auction for up to 200 super premium items on July 12 at the Babe Ruth Birthplace & Sports Museum in Baltimore and an Online Auction of more than 1,000 items at www.GoldinAuctions.com closing on July 13. The Live Auction will be preceded by a special preview night at the museum for registered bidders on July 11. Appropriately, the Yankees will be in Baltimore to face the Orioles that weekend. Collectors have until April 30, to consign rare Ruth, Yankees and other sports memorabilia into the auction.

“We thank Joel Platt for making this unique piece of baseball history available and allowing someone to add this rare artifact to their collection,” said Ken Goldin, Founder of Goldin Auctions. “The Babe did everything big, so it’s appropriate to celebrate his MLB debut with the biggest sports memorabilia auction ever. We’re excited to partner with the Babe Ruth Birthplace and Sports Museum and Steiner Sports to commemorate his career and share his legacy.”

Although the Ruth items are the centerpieces of the historic auction, collectors can also bid upon items from other legends like Joe DiMaggio, Mickey Mantle, Yogi Berra, Derek Jeter and Mariano Rivera. Several spectacular items from these legendary Yankees have already been consigned including: a 1941 game used bat: from the season of his 56-game hitting streak, MVP and World Series championship; a Mantle 1966 game used and signed fielder’s glove – the last he wore as a centerfielder; Mantle’s 1960 contract and 1967 game worn pants worn while he hit his 500th career homerun; and a 1953 Yogi Berra All Star bat.