The winning bidder of Lot #61 in the Goldin Auctions 2019 Spring Auction – Barry Bonds career home run baseball #762 – will have the opportunity to get the baseball personally signed and inscribed by Bonds, when baseball’s all-time home run leader is at the Goldin Auctions offices later this month. Bonds has agreed to inscribe the ball “HR 762 ball hit on 7/2/07.”

“Barry, he has agreed to make this ball even more historic and collectible for our winning bidder by signing and inscribing it,” said Ken Goldin, Founder of Goldin Auctions. “This ball sold for $376,612 in 2008, but at the time, no one knew it would be Bonds’ final home run. The ball remains the piece that set the all-time record, and its value is certain to have increased dramatically.” 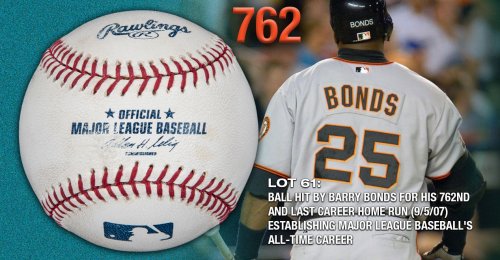 On September 5th, 2007 at Coors Field in Denver, Barry Bonds launched his 762nd and final home run. The blast set the new home run record and it remains the only 762nd Home Run ball ever hit in Major League Baseball.

Bonds, who starred for the Pittsburgh Pirates and San Francisco Giants during his 22-year career, was a 14-time All-Star, a 7-time N.L. MVP and an 8-time Golden Glove Award winner. He holds numerous records for baseball excellence, and legions of fans recall his exploits with amazement. His record for career home runs – represented by the 762nd Home Run ball – stands as his most impressive accomplishment.

The auction open through May 11 at GoldinAuctions.com.