The complete grouping of more than 700 well-preserved, century-old baseball cards – discovered in the attic of a Defiance, Ohio house earlier this year by cousins Karla Kissner and Karla Hench and nicknamed “The Black Swamp Find” for the area of northern Ohio where Defiance is located – captured national attention this summer and drew a slew of media and well-wishers to the auction floor to see the beginning of the sale of this historic collection. 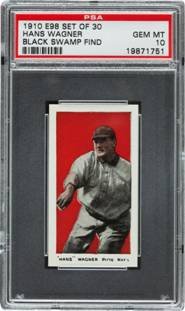 “You can’t ask for a more exciting atmosphere in an auction room,” said Chris Ivy, Director of Sports Auctions at Heritage. “The place was packed, there was a buzz in the air and the excitement was palpable.”

Not to be outdone, however, it was none other than the legendary Babe Ruth who quietly stole the show, as the finest Babe Ruth Single Signed Baseball Known, PSA/DNA Mint+ 9.5 and the only 1927 Babe Ruth Game Used Bat in private hands, PSA/DNA GU 10 both realized $388,375 apiece.

“The Babe is still the gold-standard in the hobby,” said Ivy. “It’s not surprising that these pieces would bring such a premium. They’re among the ultimate Ruth artifacts.”

Another item that grabbed significant attention in the auction, as well as a significant price, was a 1912 Boston Red Sox World Series Trophy, presented to Manager Jake Stahl, which realized $239,000, while the #1 PSA Registry Set of 1969-70 Topps Basketball cards brought $209,125 and baseball legend Adrian “Cap” Anson’s 1888 game used bat went home with an advanced collector at $179,250. 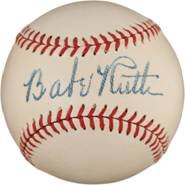 artifacts at auction bear out the value that his name brings, including two special lots in this auction: Ali’s 1975 fight worn trunks from “The Thrilla in Manila,” arguably the peak of professional boxing as a sport, realized $155,350, while a stunning 1971 massive eight foot painting of Ali by the late LeRoy Neiman, painted to promote “The Fight of The Century” between Ali and Joe Frazier, matched that $155,350 price realized.