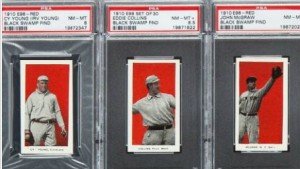 Karl Kissner picked up a soot-covered cardboard box that had been under a wooden dollhouse in his grandfather’s attic. Taking a look inside, he saw hundreds of baseball cards bundled with twine. They were smaller than the ones he was used to seeing. But some of the names were familiar: Hall of Famers Ty Cobb, Cy Young and Honus Wagner. Then he put the box on a dresser and went back to digging through the attic. It wasn’t until two weeks later that he learned that his family had come across what experts say is one of the biggest, most exciting finds in the history of sports card collecting, a discovery worth perhaps millions.

The cards are from an extremely rare series issued around 1910. Up to now, the few known to exist were in so-so condition at best, with faded images and worn edges. But the ones from the attic in the town of Defiance are nearly pristine, untouched for more than a century. The colors are vibrant, the borders crisp and white.