Hake’s Americana launched into its second half-century of operation with a smash $2.35 million auction held March 13-15 that resulted in both ecstatic buyers and elated consignors. The two-day, 2,332-lot event, with an interim day separating the sessions, set a record not only for the highest dollar gross and sell-through rate ever achieved by the company, but also the largest number of registered bidders and bids ever placed in a single Hake’s auction.

“We knew ahead of time that it was going to be a barnburner,” said Hake’s president, Alex Winter. “Two weeks before the auction closed, absentee bids had already surpassed one million dollars. Interest was at an all-time high for so many categories, especially rare comic books, Star Wars figures and political memorabilia.”

As predicted, the top lot of the sale was an important, fresh-to-the-market issue of Detective Comics #27 CGC 5.0 (May 1939) featuring the first appearance of Batman – then known as “The Bat-Man.” It had come from a recently discovered Golden Age comic book collection whose original owner purchased all of his comics new off the rack during the 1930s and ’40s. It finished within estimate at an astounding $569,275. 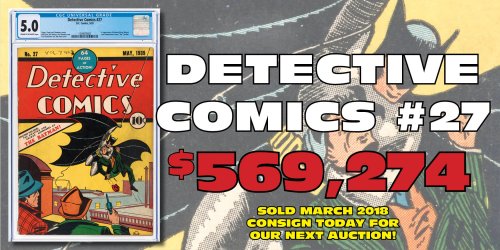 The 275-lot comic book section, alone, attracted $1 million in bids. A December 1938 issue of Action Comics #7 CGC 4.0 marking the second cover appearance of Superman was aggressively pursued to $124,025; while a May 1942 Timely release of Captain America Comics, CGC 7.0, sped past its high estimate to land at $55,050. “This particular Captain America comic is especially desirable to collectors because it features the great Stan Lee’s first work for Timely,” Winter noted.

Yet another high-flier was Marvel’s Journey Into Mystery #83 CGC 7.0 containing the origin and first appearance of the character “God of Thunder, The Mighty Thor.” Published in August 1962 with a cover price of 12 cents, the coveted comic sold at Hake’s for $19,745, just shy of its $20,000 high estimate. Many prized examples of original comic book art were included in the auction, among them Ron Wilson’s cover art for Daredevil #111 (July 1974). Significant because it represented the first appearance of future Wolverine nemesis The Silver Samurai, the action-packed artwork closed at $14,635 (estimate $10,000-$20,000).

In Hake’s November 2017 auction, Star Wars aficionados seized on Part I of the peerless Russell Branton collection. Containing 60 lots of AFA-graded pieces, the grouping commanded nearly $300,000, with many figures setting new world auction records. The Force returned for the March 13-15 sale, with 75 AFA-graded lots achieving $318,000. Leading the category, a Boba Fett rocket-firing prototype L-slot action figure from Kenner’s 1979 Star Wars toy line was bid into hyperspace, garnering $86,380 against an estimate of $35,000-$50,000. A 1978 Darth Vader 12 Back-A double-telescoping lightsaber figure also impressed, reaching $64,900 against a $35,000-$50,000 estimate; while a Princess Leia Organa 12 Back-A action figure from the same release was bid to $29,500, well exceeding its $20,000 high estimate. Also from the Branton sci-fi collection, an 18-inch-tall “Alien” from Ridley Scott’s 1979 film classic of the same name more than doubled expectations at $5,710. 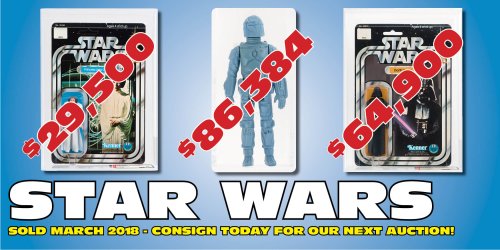 Music memorabilia collectors were able to relive the concert of their choice – or their unrealized dreams – with an exciting selection of mid-20th-century posters. A boxing-style poster advertising Otis Redding’s 1966 headlining appearance at Carr’s Beach, Annapolis, Md., neared the midpoint of its estimate at $14,280. Meanwhile Janis Joplin with Big Brother and the Holding Company took the spotlight with a 1968 black-light poster promoting the band’s show at the Alexandria (Va.) Arena Roller Rink. Designed in psychedelic style by D.W. Beeghly, it sold for $11,240 (estimate $5,000-$20,000).

With its roots planted deeply in American political memorabilia, Hake’s successfully sought out rare and highly important pieces for the March 13-15 auction. Among the 600 lots offered in the category was an 1860 cloth campaign banner touting Abraham Lincoln and his running mate Hannibal Hamlin for president and vice president, respectively. The only known example of its kind, it flew to $15,720. Among the pinbacks, the clear winner was a jugate button with an appealing visual of Theodore Roosevelt and Charles Fairbanks inside the curves of a pretzel, surrounded by the words “Souvenir of Pretzel Town – Reading, PA. 1904.” Estimated at $2,000-$5,000, it ended its run at $9,675. Of a much later era, a “Hawthorne All Out For Eisenhower And Nixon” button with a union “bug” imprinted at the bottom was clearly identified by collectors as a rarity. Against a $400-$700 estimate, it rose to $5,060. 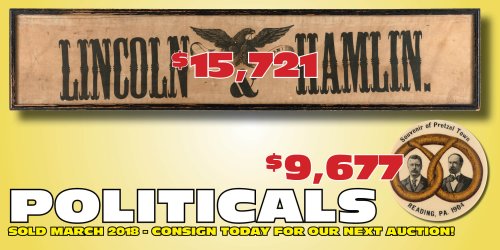