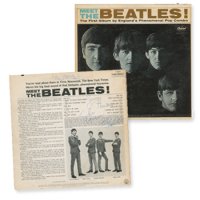 A rare copy of The Beatles album, ‘Meet the Beatles,’ given to Dr. Jules Gordon for tending to George Harrison’s sore throat prior to their appearance on the Ed Sullivan Show sold for $118,230, according to Boston, MA based auction house RR Auction. Dr. Gordon was the house doctor at the Plaza Hotel from 1942 until 1985. In his appreciation, Mr. Harrison gave, Dr. Gordon, a Meet the Beatles album containing the signatures of John Lennon, Paul McCartney, Ringo Starr and himself.

The Beatles made their legendary first live appearance on the Ed Sullivan Show on February 9, 1964—in the New York Times the day before, Thomas Buckley described George’s ailment: ‘Mr. Harrison, who is known as the quiet Beatle, awoke yesterday with a sore throat. He was treated by Dr. Jules Gordon, used a vaporizer and rejoined his colleagues at the studio late in the afternoon.

“The Beatles first appearance on The Ed Sullivan Show broadcast is still — unquestionably one of the most important events in pop cultural history,” says Bobby Livingston, VP at RR Auction.

The Marvels of Modern Music auction began on March 13 and ended on March 20. For more information including comprehensive list of auction results, go to www.rrauction.com.