Beckett Auctions is proud to open its October 2015 Magic: The Gathering and Sports auction where there is a wide array of items for many types of collectors. The headline item this month is the 1993 Magic: The Gathering Alpha Black Lotus BGS 9.5 card. This “Power Nine” item has been consigned by Collector’s Cache and has a special buyer’s premium rate of just 5%.

There are over 100 lots of Magic: The Gathering cards, so be sure and check out all of the items here. 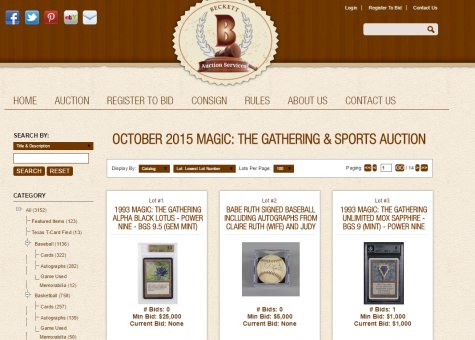 Looking for more sports memorabilia? Be sure to check out all of the new items we have added to this month’s auction. There are items like a Muhammad Ali autographed boxing glove, a Walter Payton “Sweetness” autographed football, an Emmitt Smith full-size autographed helmet and tons of new autographed baseballs and footballs.

Finally, make sure you check out the wide array of rookie cards we have up for auction from Michael Jordan to Sandy Koufax to Terry Bradshaw. Look for tons of modern and vintage rookie cards in the October auction!

For a complete look at all of our items, please take a look at the full catalog. New users are encouraged to register here.