Clean Sweep Auctions current auction is filled with exciting and in some cases unique offerings. We have a terrific run of baseball card singles and sets, one of our best offerings ever of baseball autographs, some truly great baseball memorabilia, including more Christy Mathewson personal items and several high quality rings, with note to a 1948 Indians and a 1979 Orioles. We have a terrific run of better 1930s through 1960s non-sports sets, many clean football sets from the 1950s and 1960s and several higher quality hockey singles and sets from the 1950s through the 1970s that close out the auction..  This auction runs now through October 5, 2016. Bid, view and register for the auction at www.cleansweepauctions.com. 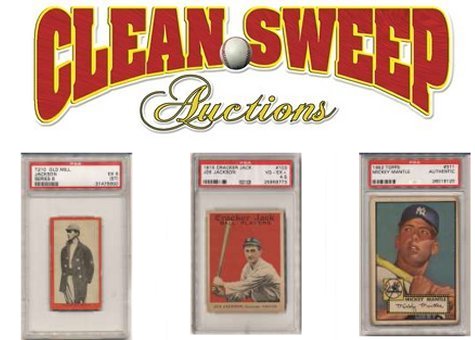 The auction begins with a legitimately historic offering, a PSA 5 (st) example of the legendary T210 Old Mill Shoeless Joe Jackson card. Among the rarest cards of a top player, this example is not even on the VCP site and we believe is the highest graded. The auction continues with a 1915 Cracker Jack Joe Jackson in a PSA 4.5 grade and a 1952 Topps Mickey Mantle in a PSA Authentic holder.

Baseball cards offer a good run of sets and lots, with note to a near-set of SGC graded T206 commons, a graded Southern Leaguer run, quality graded lots of 1949 Bowmans and our usual selection of 1950s through 1970s sets. Unopened collectors will see many great lots, including a 1982 Topps vending case and 1982 and 1983 Topps wax cases among others. Notable individual baseball card lots include virtually every HOFer from the legendary 1915 Cracker Jack set and a D329 Weil Baking Ty Cobb.

Baseball memorabilia collectors will see rare 1916 and 1917 World Series press pins from Christy Mathewson, a personal Christy Mathewson 1923 New York Giants sterling silver pass and his 1925 Golden Jubilee pass. We have many quality rings, our best run ever, including a 1948 Indians (the last Indian team to win the World Series), a 1967 Red Sox, 1979 Orioles, 1983 Phillies and MLB Alumni rings from Reggie Jackson and George Scott.

Baseball autographs are perhaps the heart of the auction. This section is anchored by a simply amazing 40-year collection from a hobby old timer, will all sorts of wonderful items that have not seen the light of day in decades. Of special note are some truly stunning ORIGINAL ARTWORKS that go back to the 1930s of Babe Ruth, Ty Cobb, Cy Young and Honus Wagner among other legends. There are some terrific lots of vintage signed cards, many outstanding earlier HOFer cuts and 3x5s and an amazing debut collection that goes back to 1900, with thousands of items, all being sold by the decade with ridiculously low minimum bids.

Single signed baseballs include a high grade Ty Cobb, a bold Rogers Hornsby and a terrific Thurman Munson. Team balls go back to the 1920s, with many high grade vintage Championship and other desirable signed balls.

Non-sports collectors should really enjoy this auction, we have sets of 1934 Skybirds, 1938 Don’t Let It Happen Over Here, 1939 War News Pictures, 1950 Freedom’s War and 1954 World on Wheels among so many others.

Football collectors will see a nice run of sets from 1948 – 1970, a stunning 1954 Bowman wax box with 118 packs from the famed Paris, Tennesse find decades ago, a great Goal Line lot and some nice rings. Hockey collectors will see higher grade sets from 1954-1979, a Bobby Orr Rookie and second-year and many PSA 7 – PSA 9 examples of key Rookie Cards.

Now is a great time to place any initial bids as initial bids must be placed on any lot by 6 PM EST of the final day.  This auction runs now through October  5, 2016. Bid, view and register for the auction at www.cleansweepauctions.com.