A game worn and signed Michael Jordan jersey from the final regular-season game as a member of the Chicago Bulls, plus a pair of his signed game-worn sneakers from the 1996 NBA Finals, along with Michael Jackson, the Beatles, Walt Disney and Marvel Comics are four of the biggest names in entertainment, that are among the 1,500 lots of rare and unique sports, entertainment, pop-culture and historic memorabilia up for bids in the 2015 Goldin Auctions October Legends Auction from October 19th through November 14th, at www.GoldinAuctions.com.

“Michael Jordan’s growing influence in the world of sports collecting is catching up to his legendary status on the basketball court as collectors who grew up wanting to be like Mike build their collections,” said Ken Goldin, Founder of Goldin Auctions. “These two lots mark significant achievements in Michael’s career and are must-have items in telling the story of Michael Jordan.” 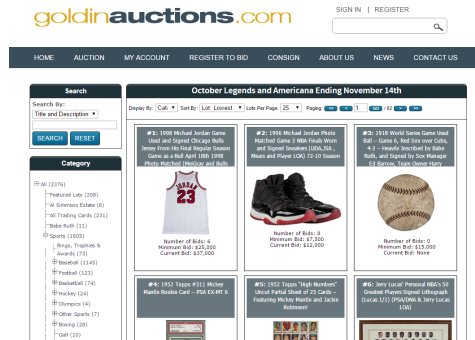 “We are very proud of the rare entertainment memorabilia we have uncovered for this auction and are thrilled to share it with collectors,” said Ken Goldin, Founder of Goldin Auctions. “The worldwide appetite for collectibles from Michael Jackson, the Beatles, Walt Disney and Marvel Comics is insatiable. It’s exciting for us to continue to bring such unique and rare items to auction.”

To register for the auction and receive a free catalog or view the live preview, visit www.GoldinAuctions.com.