Morphy Auctions, the finest auction destination for fresh to the market collections, is excited to announce their upcoming Premier Sports Memorabilia sale to be held on March 29, 2018 at the company’s Denver, PA gallery. The sale starts promptly at 9am, and includes over 300 lots of outstanding merchandise. View the digital catalog here.

Of particular note in this sale is the Gary Traugh Cassius Clay Collection, which includes one-of-a-kind, museum quality articles from the beginnings of Muhammad Ali’s climb to international celebrity. All lots from this March event are on display and available for preview in Morphy’s Denver auction gallery now.

All hands will be in the air over this sale’s simply astonishing selection of athletic gloves. Lot #1, a Cassius Clay left hand, sparing size boxing glove from 1954, is estimated at $10,000-20,000. This is the earliest known glove associated with the only three-time lineal heavyweight champion in boxing. On the front, it is painted “Glove Used By Cassius Clay When He First Came To Columbia Gym Age 12.” On the inside of its wrist area are the initials “C.C.” and “Columbia Gym Louisville KY.” This remarkable rarity is accompanied by a letter of provenance from Peter Markovian and a letter of opinion from Craig Hamilton. Lot #11, a pair of Post brand Cassius Clay amateur training gloves from the 1950’s, is estimated at $3,000-5,000. These brown leather gloves were discovered in the attic of Cassius Clay trainer Joe Martin. They are stamped “Columbia Gym” and are initialed “C.C.” in pen. This lot includes a notarized letter from Joe Martin’s daughter Jole Martin and a letter of opinion from Craig Hamilton. And lot #65, 1972-era black leather Muhammad Ali sparring gloves, is estimated at $3,000-6,000. These 16 ounce gloves were made by G&S and were probably used at the time Ali was training for George Chuvalo or Mac Foster. Each glove has been signed “Ali” in pen. These gloves come with a letter of opinion by Craig Hamilton and a letter of provenance by Peter Markovian. 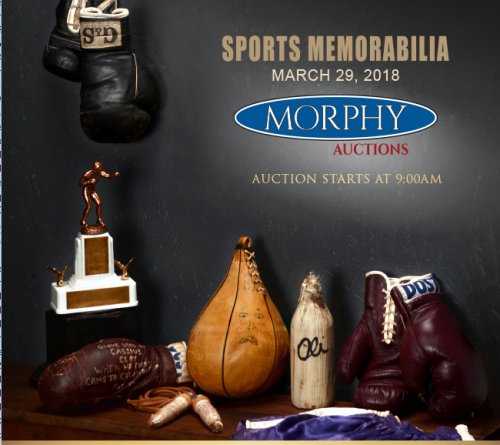 Other training and athletic materials from Cassius Clay and Muhammad Ali will surely ring a bell amongst boxing enthusiasts. Lot #12, the earliest known training trunks worn by Cassius Clay, is estimated at $20,000-40,000. Clay wore these Post brand purple satin trunks while training at the Columbia Gym in Louisville, KY. They are marked “C.C.” and are stamped “Columbia Gym.” They have a vintage tag that reads, “VERY EARLY PAIR OF BOXING TRUNKS WORN BY CASSIUS CLAY COLUMBIA GYM CIRCA 1954.” The tag’s reverse is stamped “From the desk of Joe Martin Columbia Gym Louisville, KY.” The trunks are accompanied by a letter of provenance from Peter Markovian and a letter of opinion from Craig Hamilton. Lot #8, a Cassius Clay Columbia Gym used jump rope, is estimated at $2,000-4,000. The rope has white athletic taped handles and is stamped “Columbia Gym” in blue. “Clay” is written in red at the top of each handle. In a 1983 letter, Joe Martin wrote, “I bought this jump rope for Cassius and he learned to skip rope with it like no other.” Lot #9, a Cassius Clay Columbia Gym punching bag, is estimated at $2,000-4,000. The tan bag measures 15? long and has a face drawn on it; it is speculated that the face was drawn by Ali himself. The bag is stamped “Columbia Gym Louisville KY.” This punching bag includes a letter of provenance from Joe Martin and a letter of opinion from Craig Hamilton. And lot #59, a signed glass Muhammad Ali training water bottle, is estimated at $1,000-2,000. This 1970 era-bottle has been completely taped over and is from his Deer Lake training camp. This bottle includes a letter of provenance from Peter Morkovian and a letter of opinion from Craig Hamilton.

A final stellar Clay highlight is lot #6, a 1956 Cassius Clay Louisville Golden Gloves & WAVE TV Future Star trophy, estimated at $5,000-10,000. This white Bakelite award is 14? tall and is crowned with a metallic boxer. This prize is from the collection of Joe Martin and is accompanied by letters Joe Martin, Peter Markovian, and Craig Hamilton. 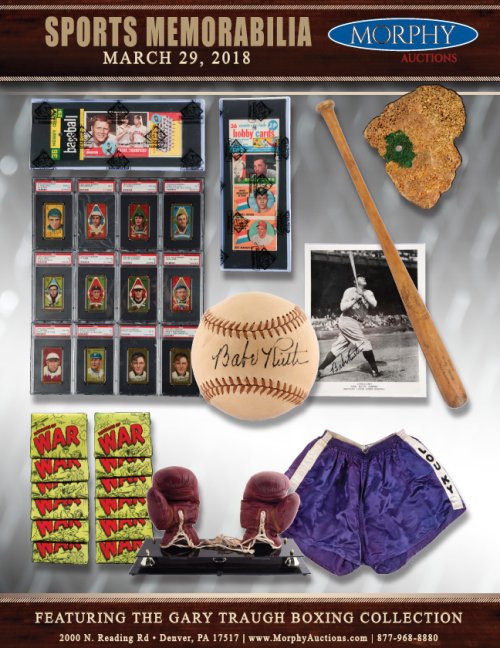 Vintage baseball memorabilia is also well represented in this sale, with phenomenal treasures from some of America’s favorite “boys of summer” on offer. Lot #127, a 1925-1926 George “Babe” Ruth professional model game used bat, is estimated at $35,000-50,000. This Hillericht & Bradsby Co. brand bat is made from ash, measures 35? long, and weighs 39.5 ounces. It was used by the Bambino during the 1925 and 1926 seasons. According to our experts, this style of Babe Ruth bat, with its long slender profile and heavy weight, is amongst the most desirable of all Babe Ruth bats. This national treasure is accompanied by its complete PSA evaluation letter. Also of championship caliber is lot #113, a spectacular Babe Ruth single signed baseball, estimated at $20,000-40,000. This fresh to the market example is an official William Harridge American League ball signed by Ruth across the sweet spot in black fountain pen. The signature grades NRMT and contrasts exceptionally well against the cream-colored ball which also grades NRMT. The ball has letters of authenticity from PSA/DNA, JSA, and SGC, as well as a notarized letter from its original owner’s family. And it’s a grand slam with lot #132, a Mickey Mantle Game used H&B bat from 1960. Estimated at $15,000-25,000, this bat shows signs of heavy game use with marks on all sides of the bat, but its factory stamps are still strong. This bat, dating to one of the most deflating Yankee seasons in memory, is accompanied by a letter of authenticity from PSA. 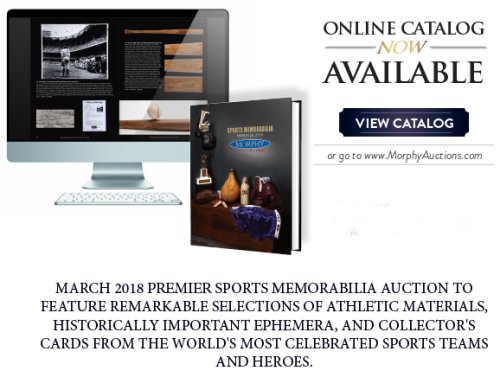 Its signed, sealed, and delivered with this sale’s fantastic assortment of sports related collectors cards. Over 100 lots of merchandise representing every major sports league in America are certain to generate friendly competition amongst collectors. Lot #274, a complete master set of T205 American Tobacco Company baseball cards, is estimated at $40,000-60,000. This exceptional set has been handpicked over several years and currently ranks 8th on the PSA Master Set registry with a 4.53 GPA. It is one of only six complete sets on the list. Every card and variation is represented; even the rare Dick Hoblitzell and Christy Mathewson variations.

This Olympic level sports sale rounds out with great selections of uniforms, equipment, awards and trophies, souvenirs, game balls, nodders, and other top tier collectibles. Lot #198, a once in a lifetime offering of 12 unopened Horrors of War cards packs, is estimated at $20,000-40,000. These were issued in 1938 under the claim that these picture cards depicting modern warfare could be helpful teaching aids. The theory was that if children were to know the “Horrors of War” then they would know peace. Millions and millions of packs sold at the beginning of WWII but almost all have been lost to time. Today, these unopened packs in exceptional condition with their original distribution envelope are so rare that they are the first and only Horrors Of War wax packs ever graded by PSA; their final grade will be released imminently.

According to Dan Morphy, President of Morphy Auctions, “We are delighted to present our second Premier Sports Memorabilia sale. This new division has really taken off and it is so exciting to see such growth and interest in these categories. Kevin Bronson and Tommy Sage Jr. have done a great job to position Morphy Auctions as an emerging leader here in such a short time. As always, it’s hard to pick a favorite item amongst all the fantastic lots on offer. Right now, Cassius Clay’s early, bright purple satin training trunks are catching my eye. Their color, accompanying materials and markings, and place in history are really astonishing. We welcome you to visit our gallery in Denver, PA to view these outstanding items firsthand, or of course check them out online anytime at www.morphyauctions.com.” 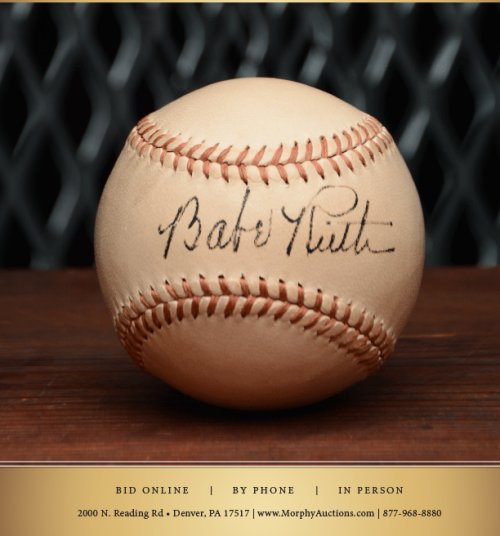 About Morphy Auctions:
Morphy Auctions, the finest auction destination for fresh to the market collectibles, is headquartered in Denver, PA. The company also has a satellite office in Las Vegas, NV. A full-service auction house, Morphy’s presents over 35 premier auctions annually. The company’s three-part mission includes ensuring consignor satisfaction with every auction, offering world-class customer service that goes above and beyond the call of duty, and providing relentless buyer support to create confidence for all clients seeking a trustworthy purchasing experience.

Morphy’s team of specialists includes the nation’s finest and most recognized experts in popular collecting categories including advertising; firearms; fine automobiles, automobilia and petroliana; coin-operated machines; antiques, fine, and decorative art; dolls, bears, toys, and trains; cast iron; coins; marbles; jewelry and wrist watches. Morphy Auctions is owned by President and Founder Dan Morphy, himself a lifelong and passionate collector of antiques, banks, and numerous other categories. Morphy’s has been in business since 2004 and has grown from two to over 65 employees in over a decade.

Morphy Auctions is located at 2000 North Reading Road, Denver, PA 17517. We can be reached by phone at 717-335-3435, by fax at 717-336-7115, and by email at info@morphyauctions.com. Morphy Auctions is open Monday through Friday from 9am to 4pm, or by appointment on off hours. For more information on Morphy’s, please visit www.MorphyAuctions.com.