The Sports Auction Company has launched there Inaugural Auction of 2020 that runs July 3 – August 2, 2020.  Take the time to register for the auction at thesportsauctioncompany.com.   The auction features a graded 1964 Topps Hockey set, 1911 T3 Turkey Red Near Complete set, many graded vintage sports cards and much more!  Bid, register and view the auction today! 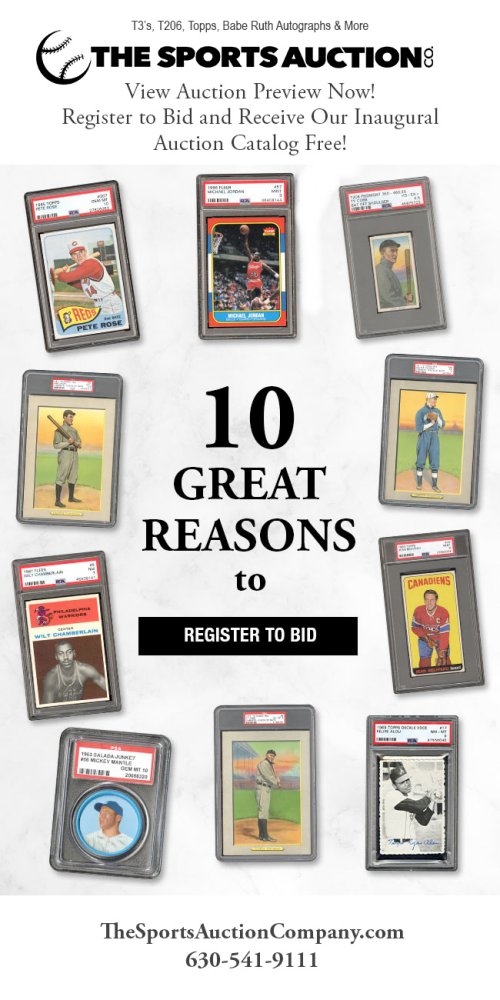 The two principals, Louis Bollman and Joseph DelGrippo, have a combined 60+ years in the sports cards and memorabilia business, with each working for several of the top sports auction houses.

LOUIS BOLLMAN
Louis has been a full-time dealer in vintage sports cards since the early 1980s, when he was a regular on the show circuit, setting up at the industries biggest and best shows across the country. Louis also organized his own catalogs, with his Louis Bollman Cards having periodic phone auctions. He is one of the first to feature full color catalog auctions, bringing a new dimension to a growing industry. He was so successful in this endeavor, he was hired by Mastro Auctions as Vice President and head of the Vintage Sports card department, helping that company become the largest auction company in the industry. From there, he moved on to develop sports card divisions at various other companies, before deciding to once again help form his own sports auction company and offer the catalog you are now enjoying. Louis specializes in collection evaluation, has helped broker some of the hobby’s most valuable sports cards, and has helped collectors build many of the finest sports card collections in the world. He is so universally recognized as having such a good eye even the grading companies have a high regard for his talent.

JOSEPH DELGRIPPO
Joseph was a vintage collector back in the 1970s, when as an adolescent he began collecting older cards after completing his ‘current sets’ in 1975 and 1976. With his father, Joseph made his first visit to a baseball card store on October 2, 1978, the same day Bucky Dent hit his dramatic home run against the Boston Red Sox. Joseph became a full-time sports card dealer in the mid-1990s and has been devoted to the industry for over 25 years. He was hired by Mastro Auctions in 2001, working with many of the most knowledgeable hobby experts, specializing in evaluating, processing, and describing vintage trading cards. Well regarded within the industry, Joseph was hired by Lelands Auction house, when they needed a vintage card expert. Joseph coordinated their Vintage Card Division. JOe was recruited by RR Auctions to start their sports division and ironically once again teamed up with Louis Bollman to help put them on the map for sports collectibles.

THE SPORTS AUCTION COMPANY (TSAC)
Working together at RR Auctions, they built a prosperous sports auction business from scratch, obtaining, organizing and auctioning several large private collections. After a second successful auction, they decided to form their own company to do the same – selling collections of cards and memorabilia, and helping their clients realize more money than they would by directly selling their collections. With both principals being former full-time dealers, the TSAC team will work for the consignor, using their talents to help improve the value of their client’s collections. Having contacts within the industry, and using third-party grading services to enhance values, the highest prices will be realized. Not every item is necessarily best served in an auction environment, and their experience can determine whether a direct sale of any item might be best for the client. While other auction houses claim to have tens of thousands of bidders, TSAC has a vast mailing list of “ACTIVE” bidders, including high-end collectors and full-time dealers. Having hundreds of full-time dealers actively bidding on their client’s items realizes much more in terms of dollars than if their clients sold their collections directly to these dealers. Let the 60 plus years of experience help you sell your lifetime collection.