Love of the Game Auctions Spring, 2017 Premier Auction is now open for bidding. Bid, view and register for the auction at loveofthegameauctions.com.  1200 lots of quality sports artifacts highlighted by Lot #1 Lou Gehrig Rookie The hobby’s hottest card and Lot #4 1923-24 Exhibit Ruth! Bidding is in progress and concludes on April 1, 2017.

• Tons of Exhibits
• More T210 Old Mills than have ever been offered before!
• Voskamp’s Coffee Honus Wagner!
• The #4 Roberto Clemente Master Set on the PSA Registry!
• More Ruth, Gehrig, Wagner, and Cobb cards than we have EVER offered before! 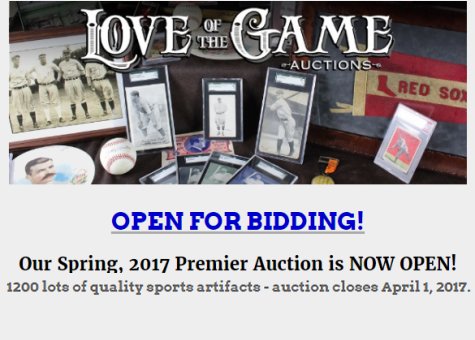 PLEASE NOTE OUR NEW BUYERS PREMIUM:
23% buyers premium, with a 3% discount for payment by check or money order.

Bid, view and register for the auction at loveofthegameauctions.com.

ULTRA-RARE 1913 VOSKAMP’S COFFEE HONUS WAGNER!
One of a long line of baseball card issues designed as a redemption offer, the Voskamp’s Coffee issue of 1913 featured 20 members of the Pittsburgh Pirates which, when completed, could be redeemed at the Pittsburgh-area grocer for one reserved grandstand seat at Forbes Field to see a Pirates game. Though Hall of Famer Max Carey is 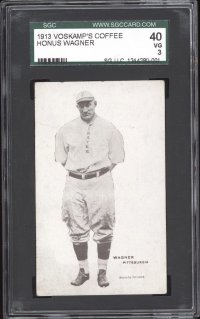 included in the set, Honus Wagner is unquestionably the key, its value approximately ten times that of any other card in the set.

The issue in general, and the Wagner in particular, are extraordinarily rare. In fact, just seven examples of the Wagner card have been graded by PSA and SGC combined, and in a testament to the condition sensitivity of the issue, two examples graded VG 40 by SGC – this and one other – are the highest-graded. While we readily acknolwedge the idea that more examples exist in ungraded form in advanced collections, we hesitate to suggest that somewhere there may be a finer example from a condition standpoint – just six examples of any card within the set have been graded EX or better by both grading companies combined. As is the case with many cards featured in this auction, a Voskamp’s Wagner is simply one of those cards that hobbyists will rarely see – if ever. This particular card last sold in 2009, for just north of $14,000. Only three other public sales of this card in any grade have occurred since, and none more recently than 2013.

More interesting – and certainly more important, however – is the fact that Ruth’s 1917-20 Felix Mendelsohn card is the first card to depict him as a member of the New York Yankees. Initially issued listing Ruth with the Red Sox, the card was changed after the Babe was sold to the Yankees. Today, it remains one of the 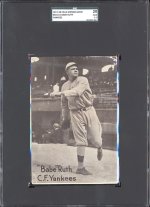 most rare of all Ruth’s cards, orders of magnitude more so than his acknowledged “rookie” card, the M101-4/5.

The Mendelsohn cards were offered in advertisements in The Sporting News for the price of $5 for 100 pictures. Since the set was issued over a three-year period, more than 100 different subjects are known, and more may yet to be discovered. The Ruth, however, stands far above the rest.

This example presents far better than the technical grade, a victim of the grading issues that occur with oversized cards such as this (it measures 4 3/8? x 6 3/8? and is housed in SGC’s holder for cabinet cards). The surface and corner wear is visible but unobtrusive, some mild wrinkling on the surface made more noticeable due to the size of the card. The reverse exhibits some staining, not easily evident on the card front. None of the wear obstructs the image of Ruth, an image similar to his M101-4 or E121 cards, though considerably larger and more clear. Quite possibly the most attractive of all the photographic issues of Ruth, simply due to its size.