Morphy Auctions, the finest auction destination for fresh to the market collections, is excited to announce this debut, full-day exclusively sports memorabilia auction to be held October 28, 2017. This sale, which launches Morphy’s new Sports Memorabilia Division, will feature over 500 spectacular and carefully curated lots. Auction highlights are on display in Morphy’s Denver gallery. Bid, register and view the auction at auctions.morphyauctions.com/catalog.aspx?auctionid=299.

Morphy’s Sports Memorabilia Division will be headed by Tommy Sage, Jr., who joined forces with Dan Morphy in 2004 to establish Morphy Auctions. Tommy is well known in the industry for his expertise in toys, trains, and sports memorabilia, and has been collecting sports memorabilia for almost four decades. Tommy is also Morphy Auctions’ Toy and Pop Culture Division Head. Tommy will be working with well-known and trusted industry expert Kevin Bronson, Morphy’s new Sports Memorabilia Consultant. Kevin has 25 years of experience handling and appraising a full spectrum of important athletic related materials and ephemera. He has worked at several major auction houses and has traveled coast to coast working with enthusiasts to help with their collecting and deaccessioning needs. Kevin has been featured on the front page of the national newspaper USA Today and is known for his phenomenal category knowledge. To support this new division, Morphy Auctions will be attending all of the major sports memorabilia shows. 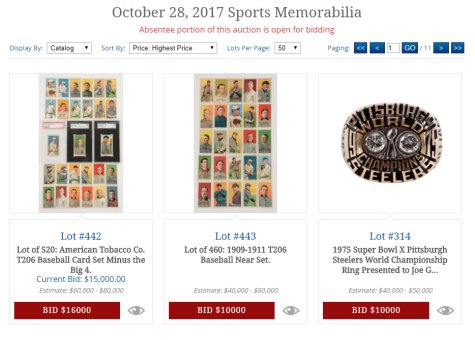 Morphy’s October sale will offer an Olympic caliber selection of sports-related autographs, equipment, cards, ephemera, medals and trophies, and other items from the most collectible categories. Baseball card enthusiasts are certain to take note of three absolutely spectacular offerings in this event. The first, a set of T206 tobacco cards missing the big four, is estimated at $75,000-100,000. The T206 was issued in 1909 – 1911 through the American Tobacco Company. It is considered the “holy grail” of among many collectors. The second, a complete set of T205 tobacco cards, is estimated at $20,000-30,000. The T205, comprised of 220 cards, was also issued in 1911 through the American Tobacco Company and is second only to the T206 in terms of desirability. And a 1952 Mickey Mantle rookie card, estimated at $35,000-40,000, is certain to be a grand-slam with collectors worldwide.

This auction is also a perfect game in terms of its offerings of signed baseballs. A baseball autographed by the 1951 World Champion New York Yankees team is estimated at $10,000-15,000. This ball features a rookie Mickey Mantle signature. And a baseball signed by Babe Ruth is estimated at $6,000-8,000.

According to Dan Morphy, President of Morphy Auctions, “Tommy Sage and Kevin Bronson are not only encyclopedias of sports knowledge, but both have a passion for sports and sports memorabilia.” Tommy Sage, Jr. adds, “We are thrilled to launch this new specialty division here at Morphy’s. We will be holding two sales events per year – one in the spring, and one in the fall. Our goal is to become the go-to auction house for the world’s most exciting and interesting sports memorabilia, and this debut sale will undoubtedly launch us in that direction.” And Kevin Bronson concludes, “I am excited to be a part of this sale featuring several exceptional collections. It’s not every day that full tobacco sets are being sold complete and intact! Add in a mix of high grade signed Yankee Baseballs and important sports cards and you have the makings of a sale destined for the record books!”

If interested in consigning to one of our future auctions, please visit our consignment page.

Morphy Auctions is one of the largest under-roof auction houses in the country, spanning over 45,000 sq. ft. The beautiful building is customized to meet the growing and changing needs of the antiques industry.