Albersheims winter auction is IN PROGRESS for bidding. To register, please visit our web-site at www.albersheims.com . The auction concludes on January 24, 2015 Auction at 7pm (PDT).  We are offering one-of-a-kind items including a great selection of game used player items, autographs, memorabilia, player awards and the Erik Williams Collection!

On August 3, 2014, Michael Strahan was inducted into the Pro Football Hall of Fame. In portions of his speech, he gave shout-outs to former teammates and opponents. On Erik Williams, Strahan proclaimed, “Meanest guy I’ve ever played against in my life. I don’t think the guy even liked his mama.” 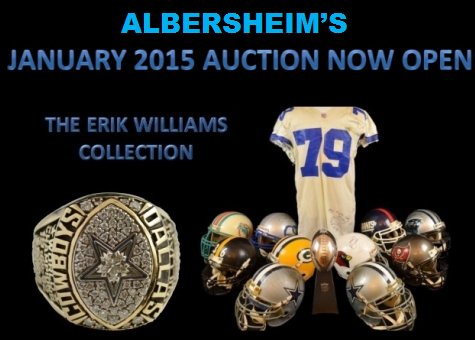 Erik Williams played in the National Football League after a stellar career at the historically African American university, Central State (Ohio). He became an NAII All-American leading the Marauders to an NAIA national championship in 1990 which was their first of 3 National titles during that decade. The Dallas Cowboys literally stole Williams in the 3rd round of the 1991 NFL draft.

Erik’s rookie year with America’s team was nothing to write home about, but after having a year of seasoning under his belt, he entered his sophomore campaign in the NFL by doing what he did best – destroying the opposition. Erik’s brute force pushed perennial Pro Bowler, Nate Newton, to left guard in order for Williams to take over the starting
right tackle position on the offensive line.

According to Wikipedia, “ In 1992, after becoming the Cowboy’s starting right tackle, he earned national recognition when he held Reggie White without a sack in a 20-10 Dallas win, earning the NFC’s Offensive Player of the Week award. Nicknamed “Big E”, by 1993, his physical and aggressive play made him the top offensive lineman in the NFL.”

Tragedy struck on October 24, 1994, when Erik was in a horrific car accident which caused him to miss most of the 1994 season. After some intense rehabbing, he was able to come back and start during the 1995 season.

From the Dallas News, “Before the car wreck, he was the best offensive lineman in the NFL,” Troy Aikman said. “I thought he was on a path to Canton. He wasn’t the same player, wasn’t the same athlete. He relied more on his toughness and nastiness. Every play was an alley fight. It was like the WWF.”

The rest of the article pays homage to just the type of player Erik Williams was – read it here
Despite the fact that Williams wasn’t physically the same player after his accident, he was still selected to three more Pro Bowls and helped guide the Cowboys to two more Super Bowls. He would finish his career with the Baltimore Ravens in 2001.

When I got a chance to spend time with Erik Williams, none of that aggression or nastiness that you’d heard about him as a player was apparent to me. Today, Erik enjoys spending time with his family, working on his business pursuits, his charitable foundation, coaching kids, and just living a peaceful life. To me, he seemed to be a gentle giant and all around great guy.

You can check out his foundation here: www.erikwilliamsfoundation.org
Click here to view and bid on specific lots from the Erik Williams collection.