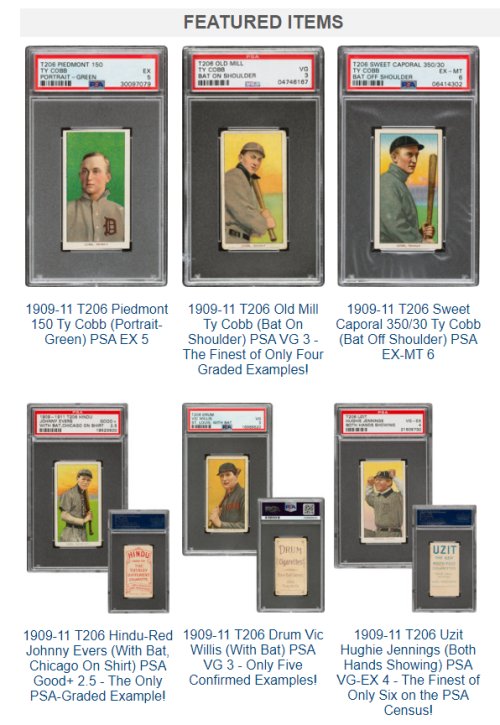 Leading off the fourth round of bidding in The David Hall T206 Collection Part IV Sports Collectibles Catalog Auction, which closes April 16, is a 1909-11 Old Mill Ty Cobb graded PSA VG 3. The Detroit Tiger is resting his bat on his shoulder – a classic, defining image of the Georgia Peach made that much more significant because it represents one of only four graded examples with the player pose and advertising combination.

Hall, founder of Collector’s Universe, amassed more than 5,000 unique player and advertising T206 combinations – believed to be the most ever assembled, cataloged and cared for by one person. They included abundant rarities sold through the 16 brands owned by the American Tobacco Company from 1909 to 1911, including copious offerings seldom seen outside collectors’ tight-knit circles. Hall, who spent years collecting and classifying and documenting cards with backstories that had seldom been told, chose Heritage to sell his collection beginning in July 2019.

Chris Ivy, Director of Sports Auctions at Heritage, calls Hall “arguably the most influential living figure in the hobby.”

For this auction, 209 cards will be available, many of them among the only graded examples of their kind.

One such offering is another highly coveted Cobb: the 1909-11 T206 Sweet Caporal 350/25 graded PSA EX-MT 6. It’s one of only eight confirmed for this particular combination of brand, series and factory, and features a portrait of Cobb, taken by Carl Horner, that was one of the earliest and most iconic taken of the ballplayer. What makes this card even more significant is the green background used, which is far harder to find than the red version.

Another sought-after entry in this auction is the 1909-11 T206 Hindu-Red Walter Johnson, with the longtime Washington Senators hurler standing with his hands at his chest – another rarity, given Johnson’s action card from this period is by far his most famous. Graded PSA EX 5, it’s only one of six PSA-graded examples of this card.

One of the rarest cards in the hobby is also available in this auction: the 1909-11 T206 Broad Leaf 460 Mordecai Brown, graded PSA VG-EX+ 4.5 – the only PSA-graded example that exists of the pitcher wearing his Chicago Cubs jersey.

Also available this go-round is the 1909-11 T206 Uzit Rube Marquard, graded PSA NM 7 – the so-called “Follow Through” card featuring the Hall of Fame pitcher. “Incredibly rare” does this card a disservice: On the back is a seldom-seen ad for Uzit Cigarettes.

“It’s hard to imagine the sports collectibles industry without the authentication and grading structures Hall innovated,” Ivy said. “Every collector who has ever earned a dollar in this business owes him a debt of gratitude.”