Bid now in Heritage Historical Auctions  September 14, 2017 Rare Books Auction. There are lots of items slated for the auction block. As always, we try to offer a diverse group of material so that the largest assortment of collectors possible can participate.  Bid, view and register at historical.ha.com. 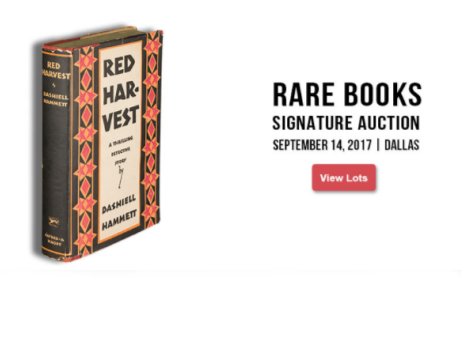 In the book trade, there is an occasional distinction made between accumulating rare books and collecting them. The difference being that collecting is accumulating with purpose. That purpose can be flexible or focused, but it should make some reflection on the collector. Some collectors rely on established lists while others only know exactly what they want when they see it. Either method is valid, depending on the collector’s goals.

In collecting crime literature, there are several threads one can follow: well-known canons (like Queen’s Quorum), award winners (such as The Edgars), or themes and genres (espionage or private investigator) to name a few. Because the genre is relatively young, most of the trends in collecting Modern First Editions also apply, such as author’s first books and books into film (the relationship between the Film Noir movement and its sources was discussed in last month’s newsletter ). It is such a robust field that even with multiple landmark collections having come to market (Adrian Goldstone in 1981, Richard Lackritz in 2002, among many others), there are still new collectors asserting their personalities and tastes and discovering new ground to cover. The pair behind The KoKo Collection of Mystery and Detective Literature are two of those collectors.

Built by a husband and wife team over two decades, The KoKo Collection became one of the premier collections in the field. What started as an idea to own each of the Edgar Award for Best First Novel winners eventually grew into an exhaustive genre survey. They were avid readers and had a deep enough love of the genre to be able to prioritize their preferences (collecting Travis McGee over Perry Mason, for example) but were shrewd enough not to let an unknown rarity slip away. All while having the awareness to buy the copy in the best condition available.

Dashiell Hammett. Red Harvest The KoKo Collection very likely has something to add to every crime literature collection. Titles range from the birth of the genre, including “The Murders in the Rue Morgue,” published in Poe’s Tales (New York: 1845) and generally considered the first modern detective story, to more contemporary favorites, such as Charles Willeford and James Lee Burke. It contains several books that might only surface once in a generation, such as an inscribed and jacketed copy of The Conjure-Man Dies (New York: 1932; often cited as the first African-American detective novel) or If I Die Before I Wake (New York: 1938; source material for The Lady from Shanghai). Contributors to the influential pulp magazine Black Mask are well represented, including Paul Cain with Fast One (Garden City: 1932) and Raoul Whitfield with Green Ice (London: 1930), in addition to the more usual suspects. Moreover, there are substantial (if not complete) first edition runs of works featuring the biggest characters in the genre (Philip Marlowe, Sherlock Holmes, Nero Wolfe, Philo Vance, James Bond, Lew Archer, to name a few).

Then, there are the twin pillars of the KoKo Collection: Red Harvest (New York: 1929) and The Maltese Falcon (New York: 1930), both by Dashiell Hammett. Hammett’s debut novel, Red Harvest, could very well be considered The Great American Novel, if the gatekeepers did not mind the sight of a little blood, and its depiction of Poisonville is arguably as relevant, politically, as ever. The better-known The Maltese Falcon is one of the most important books into film, providing the source for Humphrey Bogart’s immortal turn as Sam Spade. Both books are difficult to find in collectible condition, making the totally unrestored state of Red Harvest all the more impressive.

The KoKo Collection of Mystery and Detective Literature, which will be offered as part of our September 14 Books Auction, is the finest modern literature collection we have handled at Heritage, and we are sure bidders will recognize how special these lots truly are.