Green Jacket Auctions Spring 2017 Golf Auction is in progress.  Check out the auction now, register and bid at www.GreenJacketAuctions.com. 1000+ items of amazing golf memorabilia up for bid. Arnold Palmer described his 1964 Masters Tournament victory as the greatest achievement of his golfing career. Now, the putter he used to win his 4th green jacket, and final Major Championship, has reached the auction block and is expected to fetch $100,000.

“It’s among the most significant golf clubs in existence,” says Green Jacket Auctions co-founder Ryan Carey. “Jack’s putter from the 1986 Masters is missing; and Tiger still has his famous Scotty Cameron from his wins. But now anyone can own Arnold Palmer’s 1964 Masters winning putter.”

This putter was a key contributor in Arnold Palmer’s 1964 Masters Tournament victory. In 72 holes, Palmer only 3-putted one green. Surely every golfer is familiar with the final hole of the 1964 Masters – when Arnold Palmer used this putter to hole a 20 foot putt for victory – and then wildly swung the putter in a jubilant celebration. 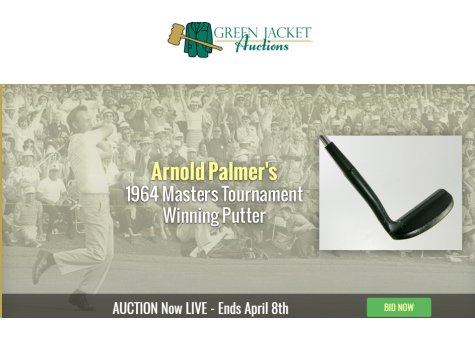 Arnold Palmer famously kept almost every golf club he ever touched. His so-called “Barn” in Latrobe, Pennsylvania still houses an estimated 14,000 golf clubs made for the King. In 1980, Palmer chose one of the Barn’s most significant residents – this 1964 Masters putter – and donated it to New Plymouth Golf Club in New Zealand. For the past 37 years, New Plymouth used the putter as a permanent trophy for its annual junior tournament, dubbed The Arnold Palmer Tournament. Now, with the ever-increasing value of such memorabilia, New Plymouth has decided to return Arnie’s putter to the United States in the hopes that it finds a more suitable, and secure, home.

Arnold Palmer’s winning 1964 Masters Tournament putter is currently up for auction at www.GreenJacketAuctions.com. Bidding on the putter has reached $34,525. The auction concludes on April 8. It is expected to fetch over $100,000 at auction.

Green Jacket Auctions is the largest golf antiques and memorabilia auction house in the world. It hosts quarterly auctions of rare golf memorabilia, which are participated in by collectors and institutions in over 50 countries.