Collectors have a chance to bid on more than 943 lots of beautiful movie posters ever offered by Heritage Auctions at its Movie Posters Auction April 7-8, 2018 in Dallas.  One of the rarest James Bond movie posters ever made – an advance British quad for Thunderball – may sell for $10,000 among a large collection of Bond-related paper and screen-used movie props in Heritage Auctions’ April 7-8 Movie Poster Auction. The sale offers almost every Bond quad poster produced up until today, said Grey Smith, Director of Posters at Heritage. 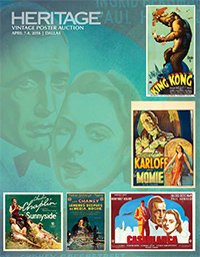 “Theater owners were actually instructed to cut the advance quads for Thunderball into four sections,” Smith said. “This makes the example in our auction one of only a small number of copies left uncut.”

A scarce, country-of-origin quad for From Russia with Love (United Artists, 1964) depicts what is arguably the best and most iconic image from the film thanks to artwork by Renato Fratini and Eric Pulford (est. $5,000-10,000). Featuring a gold-dipped Shirley Eaton superimposed over Bond (Sean Connery), the Style A quad for Goldfinger (United Artists, 1964) is perhaps one of the most desirable posters from the franchise’s 26 movies, Smith said (est. $5,000-10,000).

The auction’s selection of classic Bond posters from the American market includes:

The auction’s extensive Bond offerings features two, screen-used “nacre” style poker plaques seen in the franchise reboot Casino Royale (MGM, 2006). A pearlescent red plaque in the denomination of $500,000 (est. $2,000-4,000) and a $1 million blue plaque (est. $2,000-4,000) were made uniquely for the poker scenes in which 007 beats Le Chiffre (played by actor Mads Mikkelsen), culminating in one final pot of $115 million. Just 125 poker plaques of each color were commissioned by EON Productions from Bourgogne et Grasset, the French casino chip manufacturers founded in 1923.

For more information about these and other lots in Heritage’s Nov. 18-19 Movie Posters Auction, visit www.HA.com/7167.