The centerpiece of the collection of nearly 100 of the best Brady rookies, autographs and unopened wax boxes is the highest graded 2000 Playoff Contenders Championship Ticket autographed rookie card (a BGS MINT 9), dubbed the “Holy Grail” of Brady rookies. Lelands sold another specimen of the card (a BGS NM-MT 8.5) for a record-setting $2.25 million earlier this year. The Brady card collection up for bid also features a BGS 9.5 Bowman Chrome Refractor, numerous SP Authentic rookies, a 1/1 NFL logo shield, SPX and even a SP Authentic Football Factory Sealed Hobby Box. 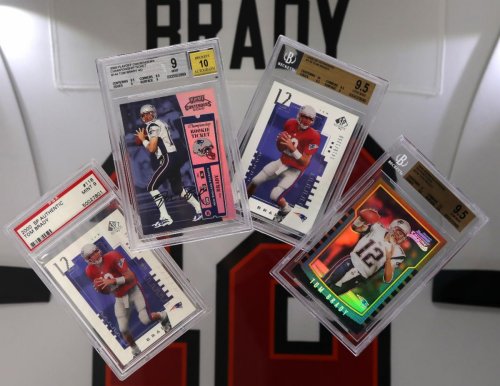 Brady threw his first TD pass in the NFL on Oct. 14, 2001, in a home win against San Diego, connecting on a 21-yard strike to wide receiver Terry Glenn. And now that iconic ball, which launched Brady’s Hall of Fame career and paved the way for the Patriots’ dynasty, is up for auction. The consignor of the ball is the fan who caught it after Glenn tossed it into the stands following his TD celebration. The consignor, who has asked to remain anonymous, is a 48-year-old Rhode Island man and longtime Patriots fan and season ticket holder.

The auction also features a spectacular Kobe Bryant game-worn jersey from his days at Lower Merion High School. The incredibly rare jersey is MEARS 10 certified and sources from one of the basketball legend’s agents and then passed down to a former NBA player.

Another auction centerpiece is a 2007-08 Exquisite Collection Rookie Parallel Kevin Durant three color RPA / 35 BGS MINT 9. Extremely scarce, the Durant 3-color is one of the most iconic Exquisite Rookie Patch Auto’s ever produced. 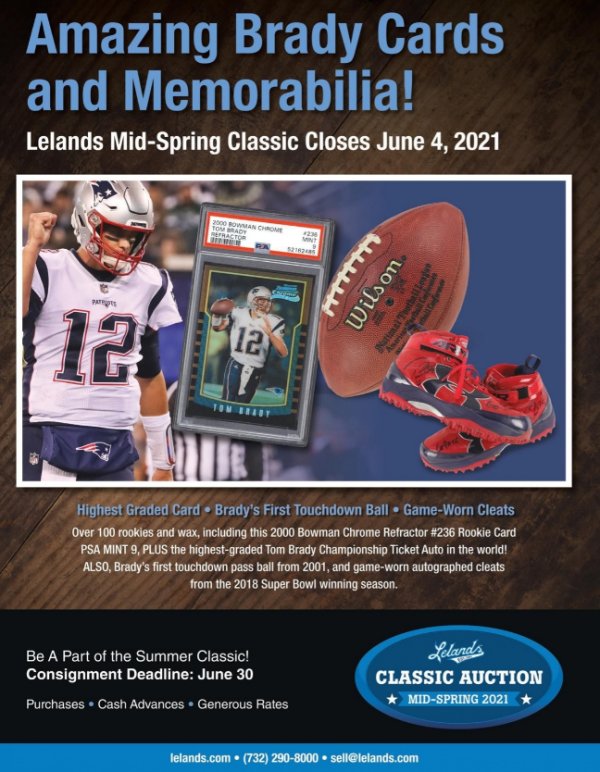 Also on the auction block are a Juan Soto 2016 Bowman Chrome Prospect Autographs Orange Refractors (BGS GEM MINT 9.5), a Ty Cobb T206 Red Portrait PSA 8 — there are none higher — and a Babe Ruth glass plate negative that produced his 1933 Goudey #181 card and highlights a collection of original images from the famed Brown Brothers archive up for bid.

The First Sports Memorabilia and Card Auction House in the World

Established in 1985, Lelands is the first sports auction house and the premier appraisers and authenticators in the entire sports hobby. Its founder, the late Josh Leland Evans, was a pioneer in the field and acknowledged by his peers as the most knowledgeable figure in sports memorabilia. Lelands has handled many of the largest landmark auctions, achieving world record prices for countless iconic items including Babe Ruth’s 1927 Yankees World Series ring ($2,093,927), his 1919 “Curse of the Bambino” signed contract ($2303,320) and a 1920 Ruth Yankees jersey ($4.5 million. For more information, visit http://lelands.com.