University Archives offers a Fine Selection of Autographs, Books and Manuscripts Including Important Documents Relating to U.S. Elections now up for bid through the invaluable auction site and will conclude on September 27, 2016, 10:30 AM EST.  Bid, register and view items from the auction here or on Invaluable.  A great selection of 143 lots to bid on. 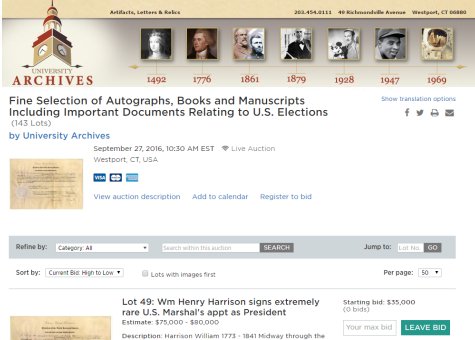 You can bid “live” on a fine variety of outstanding autographed manuscripts and books of notable presidents, historical and military figures, and much more! We have one of the lowest buyer’s premiums of only 15%! (Please note: Invaluable and Ebay charge an additional 5%).