The Worthridge Spring auction is now open for bidding and will conclude on May 24, 2016.  Bid, view and register for the auction at worthridge.com. This auction Features items from the estates of Baseball Hall of Famers Dick Williams and Jim Fregosi and hundreds of autographed sports memorabilia.

The auction features the Dick Williams Collection, there are many awards, autographs, and equipment items belonging to Dick Williams spanning his career from his time with the Red Sox and the Oakland A’s. Williams became manager of the Red Sox after they had several losing seasons and plummeting attendance, and he famously vowed to “win more ballgames than we lose.” Although they lost the 1967 World Series, Williams was named Major League Manager of the Year by The Sporting News for the vast improvement he imposed on his team. You can view the entire Dick Williams Collection here.

Worthridge is also proud to feature the Jim Fregosi Collection in their auction which includes his 1993 Philadelphia Phillies National League Championship Ring amongst a variety of items including awards, equipment, and autographs from his Philadephia career as well as his time with the Los Angles Angels. Fregosi was one of the last members of the “original” LA Angels to retire after being sidelined by several injuries, at which time he began his career as their manager. You can view the entire Jim Fregosi Collection here. 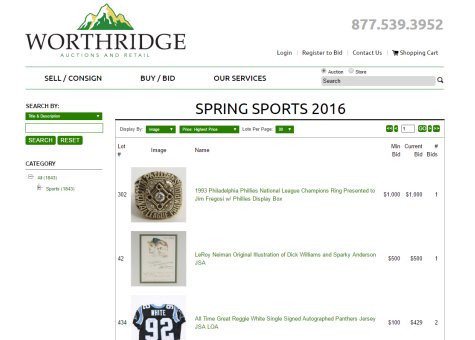 If you’d like more information about this, please contact us at info@worthridge.com, or contact our office during normal business hours, Monday – Friday 8:00 am – 5:00 pm eastern time.

If you’d like more information about the our company or to bid, view items and register for this auction, please visit or website at www.worthridge.com, or contact us directly.