Heritage Auctions September 17th Lincoln and His Times Americana & Political Auction is in progress. The live auction will be held in our Dallas gallery on September 17. This is truly a “special event” which we added to our calendar of auctions. It is a collaborative effort between Heritage Auctions and “The Rail Splitter” on-line journal, celebrating the 20thanniversary of that scholarly and entertaining publication. In some ways, it mirrors the annual auctions hosted by “The Rail Splitter” from 1995 to 2010… only bigger, better and (sorry, Jon!) minus the ubiquitous Lincoln bookends.
Interested parties are encouraged to check out the on-line catalog posted to our web site. As the title of the sale indicates, the subject matter encompasses not only Abraham Lincoln, but the Civil War, and politics in the 1844-1872 period. The Floor Session of the sale is organized similarly to past “Rail Splitter” auctions, with some modifications. The first part is devoted primarily to Lincoln (photography, autographs, political campaign items, African Americana, miscellaneous ephemera, and art works). Civil War material follows (Confederate and Union photography, autographs, and ephemera). The Civil War section includes many Lincoln-related items, so check each and every lot and do not assume that all Lincoln material appears in the first part. 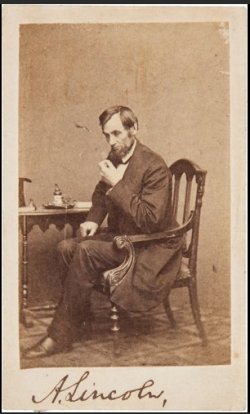 Of course, our consignors are key players in making these sales possible. We’d like to thank each and every one of the eighty (yes, count ‘em, eighty!) folks who entrusted their Lincoln “stuff” to us. We are going “all out” to merit your trust. One such individual, Dr. Michael Krane, is worthy of special mention. There are close to 200 lots in the sale which represent his entire collection, meticulously assembled over the last twenty years. These are primarily photographs, along with campaign memorabilia, memorial items, and autographs. The auction starts out with forty of his most valuable Lincoln photographs, arranged chronologically by Ostendorf number. Other items from his collection are identified at the end of each lot description.

There’s so much good stuff in the sale that we don’t know where to begin! The best autograph item is aDecember 13, 1836, letter written by Abraham Lincoln to his erstwhile fiancée, Mary Owens. The letter, close to two full pages in length, is one of the few “love letters” Lincoln wrote that are still extant (Mary Todd Lincoln having destroyed all those in her possession). Lincoln discusses politics and “opens his heart” to discuss feelings of longing, loneliness, and depression. Eventually, Lincoln sought to end the engagement, if ever there was one, and was relieved when Owens blew him off. Lincoln thought Owens had packed on the weight and became a “veritable Falstaff” while Ms. Owens later defended her decision by claiming Lincoln lacked the “links” necessary in forming a woman’s happiness.

The best numismatic item is the Henry Clay U.S. Mint presentation medal made from pure California gold. It was commissioned by Whigs from New York City and given to the elder statesman at his Washington, D.C. hotel room on February 9, 1852, together with an appropriately engrossed parchment scroll. A special silver “watch case”, engraved with images of the Capitol and Ashland (Clay’s Kentucky home) housed the medal which descended in the Clay family. The original medal was stolen and never recovered. The example we are offering was a replacement given to Clay’s widow, Lucretia. It is believed to be unique. A gold U.S. Mint medal made for one of America’s greatest statesmen… does it get any better than that? Lincoln was a presidential elector for Clay in 1844, considered him his “beau ideal of a statesman” and even met Clay on a visit to his in-laws in Lexington, Kentucky.

It’s a toss-up on the best textile item (given that we have three portrait flags and two Lincoln name flags), but I’ll give the nod to a “truly historic” piece, a crafted silk banner presented to Stephen A. Douglas prior to the start of the Lincoln-Douglas Debate at Galesburg, Illinois on October 7, 1858, held on the grounds of Knox College. This choice “relic” was made by students from nearby Lombard University. Its presentation is recorded in newspaper accounts of the time. It was displayed at the debate by a fifteen-year-old law student in whose family it descended until recently. Douglas apparently forgot about it, or didn’t want to be bothered with it, and did not bring it back to Chicago. Lincoln was presented with two banners at this event and did take back at least one of them which is currently in the collection of the Kansas State Historical Society.

We have a fine assortment of items related to Mary Todd Lincoln, including letters, a family photo of Tad, and assorted clothing. These were sent or given to a Chicago neighbor and friend, Mrs. Fowler, whose son, Henry, was a playmate of Tad’s. We believe everything in the archive dates to 1867. Of special note is a “mourning dress ensemble” which includes a silk mourning dress, full and partial petticoats, and a corset. Mary Todd Lincoln endured one personal tragedy after another and was almost always “in mourning.” We don’t recall ever seeing any other articles of Mary Todd Lincoln clothing offered for sale, so are navigating unchartered waters here, but anticipate a good deal of interest. We noticed a recent news article that claimed some of Mrs. Lincoln’s emotional problems were the result of a vitamin B deficiency… too late to do her any good!

We’ve got hair samples in various formats for Abraham Lincoln, Mary Todd Lincoln, and John Wilkes Booth. The Booth sample was taken on-the-sly by a guard at the time of Booth’s autopsy who was warned by Dr. Barnes not to remove anything from the body, but felt the directive did not apply to him, being a Sergeant of Marines. The temptation proved too strong. Sometimes, a collector has to “go for it!” Be sure to read Tom Slater’s article on collecting hair in this newsletter.

There are many pieces of porcelain, campaign and commemorative, as well as later art works. We especially like a small lithophane, made in Germany as a memorial for Lincoln. Elegant, though diminutive, it is one of only three examples extant and the only one I have ever seen offered for public sale. Bid now, for you won’t get another chance!

Anything connected with the Battle of Gettysburg and Lincoln’s Gettysburg Address is highly sought-after. The highlight of our Gettysburg material is arailroad ticket issued to Pennsylvania politician A. Hiestand Glatz to travel to Gettysburg on November 19, 1863, with an excursion of Loyal Governors. They were witnesses to two speeches… a two-hour job by Edward Everett, followed by a two-minute effort by President Lincoln we now know as the Gettysburg Address. This piece, though Lincoln-related, appears in the Civil War section of the catalog. As good as that is, the best piece in the Civil War section may well be the First National Flag (the “Bonnie Blue Flag that bears the single star”) given by Confederate spy Belle Boyd to Captain Frederic d’Hautetville at Front Royal in 1862. The story behind it is quite interesting and we encourage you to read the entire catalog entry. Boyd, a rather colorful character oft associated with Stonewall Jackson, was a mere will-o’-the-wisp of 18 during the Battle of Winchester. Based on post-war photographs of her, she’s no Mata Hari, but her contemporaries found her attractive. Some people just don’t age well!

Here are highlights from this one-of-a-kind Lincoln auction: