1948 Bowman #69 George Mikan Rookie Card – Gem Mint PSA 10 (1/1)
Despite his historical stature as “The Babe Ruth of Basketball” few career contemporary card issues exist for George Mikan. Of those, his 1948 Bowman rookie card stands not only as the key to that landmark issue, but is generally considered the King of Basketball cards, and moreover, one of the most revered cornerstones in the card collecting hobby. The offered card is the one and only GEM MINT 10 George Mikan 1948 Bowman rookie card graded by PSA with four examples having been graded Mint 9. In PSA’s company history, they have reviewed over 8,500 total 1948 Bowman basketball cards which has produced only 12 GEM MINT cards including this extraordinary Mikan rookie. It last sold in 2009 for $225,000 (a still standing record price for basketball card) and early estimates indicate the card could nearly double its previous sale price. 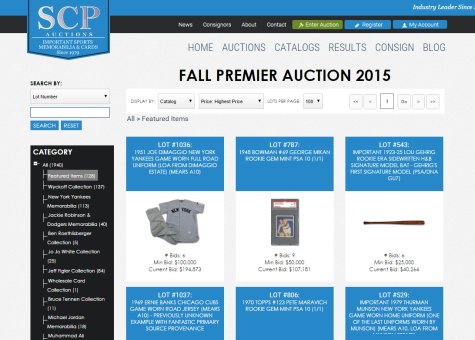 Joe DiMaggio’s 1951 Game-Worn New York Yankees Road Uniform
The 1951 MLB season will forever stand as a definitive year in the history of the New York Yankees franchise. The campaign would mark the final curtain call of the “Yankee Clipper,” Joe DiMaggio. In 13 seasons he amassed 361 homers, averaged 118 RBI annually and compiled a .325 lifetime batting mark. Here is the striking grey flannel New York Yankees road jersey and pants that were worn by “Joltin’ Joe” in that bittersweet final season. The uniform originates from Joe DiMaggio’s personal collection of career mementos, and along with a 1951 home ensemble, is one of only two DiMaggio uniforms in the world with direct player provenance. Early estimates price the uniform at $400,000+.

1980-81 Wayne Gretzky Edmonton Oilers Game Worn Road Jersey
At 17 Wayne Gretzky turned pro with the World Hockey Association’s Indianapolis Racers who quickly traded him to the Edmonton Oilers, where he was allowed to keep uniform number 99. In 1979, Gretzky made his NHL debut. This incredible road blue knit gamer by Sandow SK dates from Gretzky’s second season with Edmonton and is generally regarded as the finest Gretzky game jersey in the hobby. Estimate: $100,000 – $150,000.

1969 Ernie Banks Cubs Game Worn Road Jersey – Fresh to the Hobby
Offered here is Banks’ Chicago Cubs road jersey from 1969, a season in which the team found itself in first place for 155 days but finished second in the N.L. East division standings to the eventual World Series Champion New York Mets. Among the few surviving original, unaltered Banks jerseys known, the offered road example, previously unknown to the hobby though impeccably preserved, ranks near the top. Estimate: $100,000 – $150,000.

1957-58 Topps Basketball Complete Set in Uncut Sheet Form
This incredible, one-of-kind uncut sheet remains a singularly historic and important collectible in the field of basketball card collecting. This card set represented the only basketball card release for the Topps Company until it came out with its 1968-69 Topps Test set. The key rookie cards for this set include: #1 Nat “Sweetwater” Clifton; #17 Bob Cousy; #19 Tom Heinsohn; #24 Bob Pettit; and #77 Bill Russell. Presented here is an extremely rare, and possibly unique, uncut sheet from the set that measures 28” wide by 43” high and originates from the Topps archives. Estimate: $75,000.

The Jeff Figler Collection
A professionally certified sports memorabilia appraiser and a certified member of the Appraisers Association of America, Jeff Figler owns one of the largest and most diverse collections of sports, pop culture and presidential memorabilia in the country. His top offerings in SCP Auctions’ 2015 Fall Premier include the 1952 Topps Baseball complete set with the vast majority of cards including the Mickey Mantle card (#311) grading in the VG to EX range as well as several other complete Topps Baseball sets extending from the 1950s through to the ‘70s. His collection also boasts an exceptional assortment of game-worn and autographed memorabilia.

High-Grade 1911 T3 Turkey Red Set Break
The T3 Turkey Red tobacco premiums were the most dramatic major card set ever produced. Issued more than a century ago (1911), these mail-in tobacco premiums were and still are unprecedented in their enormity and artistry. Their size proportionately increased the likelihood of creases and other damage over time, making it very difficult for discerning collectors to find even mid-grade examples. With 100 baseball subjects in all, the pursuit of a complete collection in a presentable state of preservation is a worthy endeavor that requires patience and determination. The group presented offers a giant leg up. Culled from a long dormant complete set, this newly graded crop of T3s includes many low pop examples graded at the seldom achieved EX 5 and higher threshold. Highlights include examples of Ty Cobb (PSA 4), Christy Mathewson (PSA 5) and Cy Young (PSA 5) to name a few.

The Jo Jo White Collection
Selected by Boston with the No. 9 overall pick in the 1969 NBA Draft out of Kansas University, White helped the team win two titles (1974 and ’76) and finished his 10-year career with the Celtics averaging 18.3 points per game and led the team in assists four different seasons. Top items include his three championship rings (1974, ’76 and ’08, the latter presented to him for serving as a community relations representative for the team), NBA All-Star Game plaques, two collegiate All-America selection awards, and several key mementoes from his time competing at the Boston Garden.