This remarkable game-worn and signed New York Yankees home jersey was worn by the Hall of Fame skipper Casey Stengel during the 1956 World Series, an epic battle that saw the Yankees defeat the Brooklyn Dodgers in seven games. Among the hallmarks of the Yankees glorious â€˜56 season are Mickey Mantleâ€™s historic Triple Crown performance and Don Larsen’s feat for the ages, a perfect game in Game 5 of the World Series.

This Spalding jersey was originally obtained from the famed Yankees Clubhouse Manager Pete Sheehy. During the renovation of Yankee Stadium in 1974 Sheehy began to pare down his substantial collection of vintage New York Yankees jerseys from players who competed from 1927 to ’74. Sheehy parted ways with this particular jersey in the early months of 1980 to California-based uniform collector Dick Dobbins. It was then acquired by our consignor in 1987. The size 44 home flannel jersey is soft and supple and displays magnificently in spite of some minor staining and a few small moth holes. The Spalding tag is located on the left front tail which also sports the requisite identifier “Stengel” atop “37 – 56” in chain stitching. The front left chest sports its original interlocking felt “NY” navy logo. The number on the back of the jersey (‘7’) has been professionally restored.

The magnitude of this Yankees treasure is immeasurably enhanced by the fact it has been photo-matched to the 1956 World Series. Every Yankee pinstriped flannel garment of this era is as unique as a snowflake. Due to the fact that each jersey was hand stitched, the pinstripe patterns vary from uniform to uniform. The alignment of the pinstripes on this jersey (most readily apparent at the seams of the shoulders, collar and ‘NY’ outline) provide an exact match at every corresponding point visible in the photo presented here. The photo is catalogued by Corbis as being taken in the Yankees clubhouse on October 7, 1956 following Game 4 of 1956 World Series at Yankee Stadium. Corbis lists the original caption for the photo as, â€œThings look very different today for Yankee manager Casey Stengel who gives out with a broad wink in the dressing room after his Bombers squared up the World Series two-all today with a 6-2 triumph over the Dodgers. Ol’ Case plans to start big on Don Larsen against vet Sal Maglie on the mound tomorrow.â€ This definitive photo-match having been established for Game 4 makes it an almost certainty that this jersey was also worn by Stengel for Games 3 and 5 at Yankee Stadium, the latter at which Larsen executed what many consider to be the greatest accomplishment in the history of our national pastime, pitching the first and only perfect game in World Series history.

In addition to the clear evidence that this jersey was worn by Hall of Fame manager Casey Stengel during the 1956 Fall Classic, this is believed to be the only Stengel-signed home pinstripe gamer. Stengel signed the jersey in black fine-point marker just below the interlocking ‘NY’ logo and added the inscription: ‘Hall of Fame 1966’This one-of-a-kind jersey is easily among the finest know artifacts from the immortal Yankees manager, and a museum caliber piece of baseball history.

From Jackie Robinson’s 1949 game-used bat, one of only two known from his National League MVP campaign, to Clemente’s 1971 autographed and game-used bat swung during his second World Series championship season with the Pirates, SCP Auctions is proud to present dozens of the hobby’s finest game-used bats from many of the game’s most iconic players in its current Fall Premier Auction. Bats swung by pre-war diamond legends with last names like Gehringer, Cochrane, and Kelly are included in this exceptional lineup. A who’s who of post-war and modern sluggers are represented as well, including Musial, Mays, Berra, Bench, Munson and Jeter to name a few. 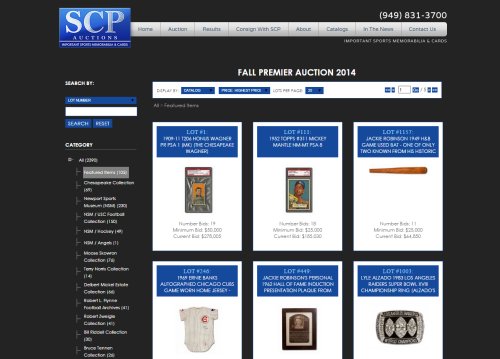