To complement the 2017 Goldin Auctions Premium Live Summer Auction at the National Sports Collectors Convention this month, the sports auction house is also hosting a 1,745-lot online auction at www.GoldinAuctions.com through August 5th. In additional to a wide assortment of sports, pop-culture, history and entertainment memorabilia up for bids, the auction is headlined by personal memorabilia collections from NFL Hall of Famer Michael Strahan, major league great Lee Smith and 165 lots of New York Mets memorabilia consigned by former Mets players and super-fans.
“It’s an honor when legendary players like Michael Strahan and Lee Smith consign their memorabilia with us,” said Ken Goldin, Founder of Goldin Auctions. “There are a variety of items and many different price points so fans and collectors can own a piece of these two great players.”

The Michael Strahan Collection (Lots #562-577) includes 16-lots of memorabilia consigned by the former Giants great and current television personality. The highlights of the collection are three game-worn and signed jersey including a 1994 Giants road and home throwback jersey with the 75th anniversary patch and a 1997 signed and heavily inscribed Giants home jersey; a 2004 Giants rare red home jersey with Giants 80th anniversary patch and a game-used and signed helmet; a 2007 signed Giants road jersey from his Super Bowl and final season and much more.

The Lee Smith Collection (Lots #578-649) includes 71-lots of awards, game-used memorabilia and historic baseballs from the 7-time MLB All-Star and 3-time Rolaids Relief Award winner, who still stands baseball’s third all-times leader in saves with 478. The highlights of the collection include: Smith’s 1992 and 1994 Rolaids Relief Pitcher of the Year Trophies; his 1987 and 1992 MLB All-Star Game ring; 40 baseballs from games he saved including career save #400 and career save #478 – the last of his career and the MLB record before it was surpassed by Mariano Rivera and Trevor Hoffman; and game-worn jerseys from the Cubs, Yankees, Orioles,

The Amazin’ Mets Collection (Lots #1661-1826) is headlined by (Lot #1661) Ed Kranepool’s 1969 World Series Ring and (Lot #1662) Dwight Gooden’s personally owned 1986 World Series Trophy. Both items come with LOA’s from the players. As previously reported, Kranepool is selling the ring and other memorabilia to help pay for costly medical expenses. Some of the other Amazin’ Mets lots include: Al Weiss’ game-worn 1969 World Series jersey; Kranepool’s 1969 World Series game-used first baseman’s glove; a 1969 Mets team signed baseball with 31 signatures including Seaver, Hodges, Ryan and Berra; plus more than a dozen game-worn jerseys from Mets players such as At Shamsky, Bud Harrelson, Jerry Grote, Wayne Garrett, Tommie Agee, George Foster, Jose Reyes and many more; and even a solid brass rocking chair presented to Heine Manush at the 1969 Mets old-timers game.

Beyond these three unique collections, some of the other highlights include:

Lot #559 – 1932 Amelia Earhart Signed Certificate of Landing for 1st Woman Solo Flights Across the Atlantic Ocean – After her successful voyage, Earhart filled out the offered Certificate of Landing. On this form, she filled out all of the information of her trip, including the time and date of her landing, and information about her plane. She signed the paper twice in black fountain pen. Additionally, two witnesses, journalist Cecil King and constable T. Sawyers, signed the bottom of this paper. This certificate is in sterling condition and is largely unaltered by age. Includes JSA certification.

Lot #561 – Beatles Congrats Signed John, George & Ringo – This contract was likely signed in the early 1970s, after the band’s breakup. Addressed to the Fab Four’s accountants, it details an accounting of the band’s assets, liabilities, and money between the dates of December 1, 1966, and March 31, 1968. This item is accompanied by three LOAs, one from Frank Caiazzo, the foremost Beatles authenticator, another from well-known Beatles authenticator Perry Cox, and a third from PSA/DNA (W05542) authenticating the signatures. 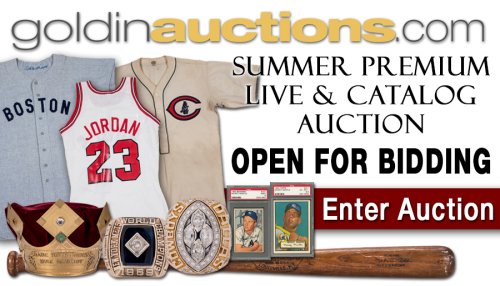