A 1931 New York Yankees team-signed ball with Babe Ruth and Lou Gehrig, hundreds of vintage sports card sets and lots along with numerous unopened wax, cello and rack pack boxes from the past are among the highlights in Wheatland Auction Services’ new online catalog.  Bidding has opened in the auction, which includes over 700 lots and will continue through March 5.  Bid, register and view the items at www.wheatlandauctionservices.com.

The 1931 Yankees ball is the only one authenticated by JSA that has both Ruth and Gehrig on the sweet spot.  The ball has 27 signatures including Bill Dickey, Red Ruffing, Tony Lazzeri, Joe Sewell and other members of the team that holds the modern era record for runs scored in a season with 1,067. The ball carries a pre-sale estimate of $15,000-$30,000. 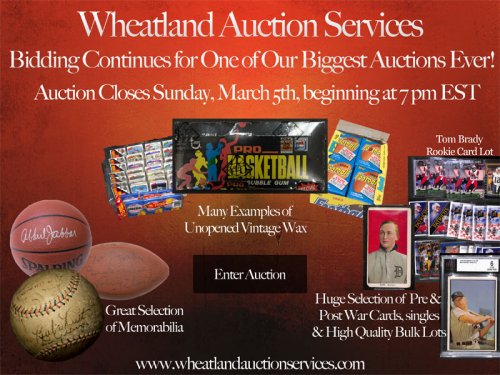 As usual, Wheatland will offer lots for collectors on all budget levels with Hall of Famers, stars and commons from sets such as T206, 1953 Bowman and others, in a variety of grades.

The auction includes several “bulk buys” featuring thousands of cards from specific sets in the 1960s and 70s, many including stars, short prints, high numbers and special cards with some in high-grade.

Beyond the ’31 Yankees ball, memorabilia collectors will have  chance to bid on older World Series programs, vintage pennants and autographed memorabilia.

To see the entire online catalog and register to bid, visit the company’s website .