Bidding is open for the Legendary Auctions November 16–17 Catalog Auction. Featuring 100s of Singles, Groups and Many Highly-Ranked PSA and SGC Registry Sets. Also including a 1910 Philadelphia Athletics World Champions Team Signed Ball, a circa 1912 Ty Cobb Tobacco Tin and a 1916 M101-4 Sporting News #152 Babe Ruth, Rookie. Bidding for all lots begins November 7th. To register to bid call (708) 889-9380 or visit legendaryauctions.com. Featuring The Alan Getz Collection — which includes one of the most comprehensive World Series and All-Star Game Program Collections in existence.The Bidding has Begun for the Legendary November 16–17 Auction.

Our November 16–17 Auction features a special separate catalog dedicated to the first offering from this landmark collection.

In 2008, veteran hobbyist Alan Getz passed away from a heart attack at the age of 65. Alan, one of the most respected and knowledgeable sports publication collectors in the country, had assembled one of the most comprehensive World Series and All-Star Game program collections in existence, including the earliest examples. He was a renowned sports collector who had a jovial personality and enjoyed discussing his hobby with others. He was also a businessman, a father of two and, of course, a huge sports fan.

For Alan, sports programs always had the most allure because unlike baseball cards, he felt, programs were not made to be collected; they were just printed for game days. “For me, it’s part of the game. It tells a story about the person who was actually at the game and a little about the game at that time in history.”

Baseball was not the only sport that Alan cherished. He also accumulated a comprehensive collection of college and pro football programs, including New Year’s Day bowl games, AFL and NFL championship games, Super Bowls, and much, much more. He also found ticket stubs to be historically significant, and ended up collecting a variety of tickets from World Series and All-Star games, football championship games, and the like. He didn’t stop with these sports, as he also kept basketball, hockey and boxing programs in his vast holdings.

Legendary Auctions is proud to offer the first installment of the Alan Getz Collection, with a number of future auctions to feature the balance of the collection. We can certainly say that this is by far the largest collection of sports publications ever to reach public auction, and we are extremely grateful to Lorraine and Monica Getz, who have entrusted us to handle their father’s lifetime collection.

Bidding has begun at www.legendaryauctions.com on The Alan Getz Collection and over 2,500 other offerings of the finest sports collectibles the industry has to offer. 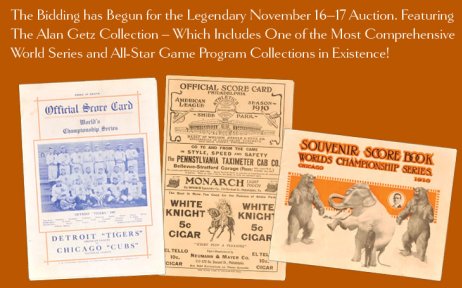