Lot 52053: “The Eagle Has Landed.” We are extremely proud to present such an important piece of history to our bidders- the exact pages from the Apollo 11 Guidance & Navigation book that Neil Armstrong used to landEagle on the moon. These are originally from Buzz Aldrin’s personal collection and he has signed and certified each page. Click on the link for a full description with detailed photos. Make sure to read the text of Buzz Aldrin’s two-page Letter of Authenticity for an exciting step-by-step explanation of how important these pages were to that landmark historical event. This is definitely a museum piece. 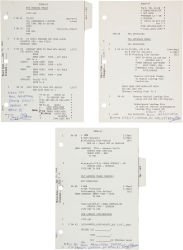 James Lovell has supplied us with some absolutely amazing Apollo 8 and Apollo 13 material from his personal archives:

Lot 52045: Apollo 8 Flown “Target of Opportunity Flight Chart (ATO)” with Crew-Named Crater Notations. This is one of my all-time favorites, a flown chart bearing the written-in names Bill Anders gave to various craters before the flight. Read the description to see why these names aren’t in use today.

Lot 52046: Apollo 8 Flown Gideon’s Bible (New Testament, Psalms, Proverbs). Another favorite of mine, a perfect addition to a Biblical library or museum (or maybe a great gift for your pastor or priest). It might have been offered sooner; read the description to find out why it wasn’t.

Lot 52090: Apollo 13 Flown Speed-Up Burn Checklist Cue Card. A successful burn two hours after rounding the far side of the moon, aided by this cue card, boosted Apollo 13’s speed, cutting down its travel time back to earth thus providing a better margin for crew survival. This is just one of four Apollo 13 flown cue cards in this auction; see also Lot 52092, Lot 52093, and Lot 52094.

Lot 52091: Apollo 13 Flown Fra Mauro Lunar Landing Site Map Photo. A flown lunar map of what would have been Apollo 13’s landing site. This is where Apollo 14 would later land and explore. 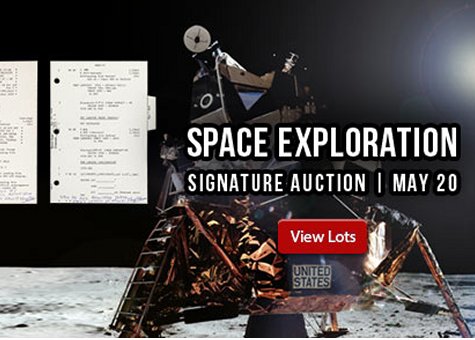 A few more highlights below:

Lot 52002: Mercury Seven Astronauts: Photo Signed by All. A great 1960-vintage 8″ x 10″ NASA photo picturing and signed by all of these brave spaceflight pioneers.

Lot 52015: NASA Astronaut Group Two: Large Color Photo Signed on the Mat by All Nine. The above-mentioned “Mercury Seven” astronauts were chosen in April 1959. In September 1962, with the Gemini and Apollo flights on the horizon, NASA chose nine more to face the new and more technical challenges ahead (four of these had advanced engineering degrees). This is a gorgeous 11″ x 14″ color photo on a 16″ x 20″ mat features all nine signatures (a few of these names may sound familiar): Neil Armstrong, Ed White II, Elliot See, Frank Borman, John Young, Tom Stafford, James Lovell, Jim McDivitt, and Charles Conrad.

Lot 52112: Apollo 15 Lunar Module Flown “Sieger” Crew-Signed Cover, Serial Number 057, One of 100 Sent to and Sold by Herman Sieger in 1971, with Notarized Certification on the Verso. This is not one of the crew-owned covers (which are rare and desirable) but rather one of the 100 that were sent to and sold by German stamp dealer Hermann Sieger. First one of these Heritage has offered.

IMPORTANT: Please note that for all auctions closing on May 14th, 2016 or later, excluding the categories of Sports and Movie Posters, the minimum Buyer’s Premium is $19. Please direct any inquiries to 214-409-1150 or Bid@HA.com.