The book considered by many to be the “Holy Grail” of comics collecting is expected to compete for top-lot honors at Auctions’ Comics & Comic Art Auction May 10-12 in Chicago in what could be the most lucrative comics auction ever held.

“This auction has a chance to be among the largest comics auctions of all time, if not the largest,” Heritage Auctions Comics Director of Operations Barry Sandoval said. “It will be in a vibrant city that is easy to reach from just about anywhere, and we have an extremely strong collection of valuable comic books that will draw the attention and interest of comics collectors from just about everywhere.” 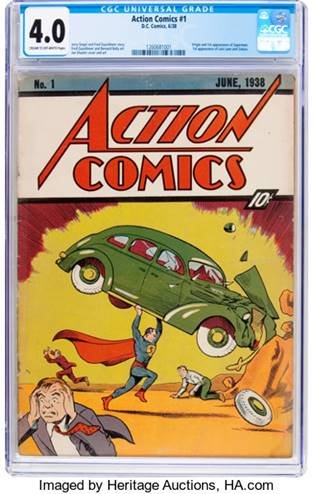 Action Comics #1 (DC, 1938) CGC VG 4.0 Cream to off-white pages (est. $650,000+) is among the most coveted comic books in the hobby. The issue generates major interest regardless of its condition, and this is one of the highest-graded copies ever offered by Heritage Auctions. Ernst Gerber’s The Photo-Journal Guide to Comic Books rated it “scarce,” and CGC’s census lists just 40 unrestored copies. The first appearance of Superman launched the Golden Age of Comics, and every superhero that followed is in debt to the character created by writer Jerry Siegel and artist Joe Shuster (artist). The issue also sits atop Overstreet‘s “Top 100 Golden Age Comics” list.

Another highlight will be Frank Frazetta Death Dealer 6 Painting Original Art (1990) (est. $600,000+). Serious collectors covet Frazetta paintings, 12 of which have realized six-figure returns in previous Heritage auctions. One –At The Earth’s Core – sold for a record $1,075,500. Five of the top 20 prices paid in HA’s Comics & Comic Art history have been for Frazetta paintings. The axe-wielding Death Dealer might be Frazetta’s most well-known character, and this image was used as the cover of Death Dealer #6, which was published in 2008 by Image Comics.

Whiz Comics #2 (#1) (Fawcett Publications, 1940) CGC FN 6.0 Off-white to white pages (est. $250,000+) is the finest copy Heritage Auctions has offered of the key comic that provided the origin and first appearance of Captain Marvel. CGC has certified just 22 “Universal” label copies of this issue. In the early days of comics collecting, this issue and Action Comics #1 were considered to have similar value. This issue, with cover and story art by C.C. Beck, is ranked No. 13 on Overstreet’s list of “Top 100 Golden Age Comics.” Many consider it likely that it will enjoy a boost in value from the upcoming Shazam! movie that is scheduled to be released in early 2019.

John Romita Sr. Amazing Spider-Man #61 Cover Original Art (Marvel, 1968) (est. $200,000+) is a prized issue among serious collectors, in part because offers the first cover appearance of Peter Parker’s girlfriend, Gwen Stacy, and her father, Captain George Stacy. It features a story by Stan Lee and with artwork by iconic artist John Romita, Sr., whose original artwork for Spider-Man #100 sold in February for $478,000. During Romita’s run, Spider-Man evolved into Marvel’s corporate mascot. This lot is signed by the artist in the lower right margin.

One of the most desirable Silver Age DCs ever offered by Heritage Auctions, Justice League of America #1 (DC, 1960) CGC NM+ 9.6 Off-white pages (est. $200,000+) is the highest-graded copy known. It is a stunning copy in pristine condition rarely found for comic books in their sixth decade of existence. CGC has certified more than 1,100 copies of the issue to date, with less than 3 percent earning a grade even as high as VF 8.0. This classic includes appearances by Batman, Wonder Woman, Superman, Aquaman, Flash, Green Lantern and the Martian Manhunter.

A fresh-to-market copy of Batman #1 (DC, 1940) CGC FN- 5.5 Cream to off-white pages (est. $200,000) is making its debut in this auction. It is an issue with a pedigree of significant auction success: two other copies proved enormously popular this year when a FN/VF 7.0 copy sold for $334,600 and a CGC VG- 3.5 copy went for $143,400 in Heritage’s February 2018 auction. Overstreet ranks this issue, the cover of which was done by Bob Kane and Jerry Robinson, as one of the five most valuable comics in the hobby, thanks in part to the debut appearances of both The Joker and Catwoman.

The auction also includes a strong collection of early issues of Playboy magazine, all but one of which is from the Premier Playboy Collection, the finest collection ever offered through Heritage Auctions. The collection includes every issue in the first two years of the magazine’s publication, with many of the copies in the highest grade in CGC’s census, all with white pages. Some of the top Playboy lots include: