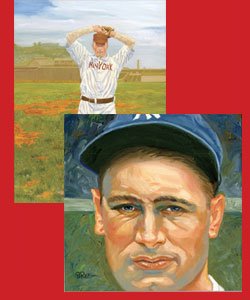 The Conlon Collection by Dick Perez
First there was Perez-Steele. Then the Hall of Fame. Next came Diamond Kings. And most recently, The Immortals.  Now, Dick Perez, the world’s preeminent baseball artist, unveils his most intriguing project to date: The Conlon Collection. Never before has this master painter—or, for that matter, any other sports artist—devoted himself exclusively and entirely to one photographer’s body of work. Yet here, in partnership with Legendary Auctions, Perez focuses his unique style and broad palette on none other than the greatest baseball photographer in history, Charles M. Conlon (1868-1945).

The unprecedented multi-year series presents an array of Perez’s freshly created artworks spanning Conlon’s three archetypal genres: Scenes, Portraits and Studies. From young Christy Mathewson practicing his wind-up at the Polo Grounds, to fierce Ty Cobb spraying dirt as he slashes into third base, to dough-faced Babe Ruth staring intently into the camera’s eye, this is baseball at its illustrious best. This is the Grand Old Game re-imagined anew. This is our National Pastime as iconically captured by Conlon…and provocatively transformed by Perez. Click here to view The Conlon Collection by Dick Perez. 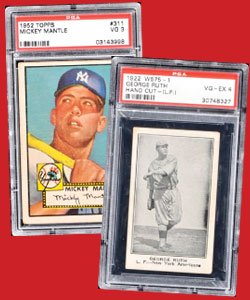 introduction, we quickly realized that he could tell the story better himself! So here is a biographical sketch of the Satellite Beach Collector as told by the man himself:

Growing up in Hudson, Massachusetts, I loved the Red Sox and hated the Yankees. As a kid, I’d trade any Mickey Mantle card for Ted Williams. My mother threw out all my cards when I joined the U.S. Navy.

I began collecting again in the early 1980s. As an adult, I still loved my Red Sox and Ted Williams, but also had read a lot about baseball’s early days of baseball and became intrigued with pre-war thru 1950s cards and memorabilia. My focus quickly zeroed in on Babe Ruth and Mickey Mantle.   Click here to read the whole story and view The Satellite Beach Collection.

The John Graham Player Endorsed Store Model Glove Collection
One of the finest galleries of player endorsed store model gloves ever assembled was compiled by Texas collector John Graham. Focused on condition as well as completeness, his amazing “finds” were drawn together to form a museum-caliber trove of astonishing breadth. (His diligence in seeking out and acquiring the most exceptional items was gentlemanly in nature, but nevertheless unrelenting.) Consisting of the most comprehensively representative and highest-quality material imaginable – including a mind-boggling 85 of the 88 known pre-war glove models endorsed by Hall of Famers (plus Joe Jackson) – Graham’s collection served as the resource for simply incredible displays. (These are pictured in Graham’s 2010 book, Baseball Gloves – Store Model Gloves from 1880’s to 1940’s – From the Collection of John Graham, which also acts as an invaluable, pictorial reference work in full color.) 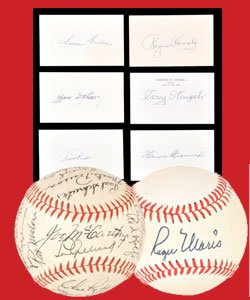 The Lake Shore Drive Autograph Collection
Our consignor, a lifelong autograph collector and baseball devotee, today calls Lake Shore Drive home, but his humble roots extend back to blue-collar Wrigleyville — where he grew up just a stone’s throw from the Friendly Confines during baseball’s postwar Golden Age.

He has been an expert member of the Society of American Baseball Research (SABR) for over 30 years, while contributing to SABR publications, the Sporting News record book, Pen & Quill (the official magazine of the Universal Autograph Collectors Club), and numerous baseball blogs.

Above all else, however, our consignor holds court as a dean of autograph collecting, with 35 years of sports-memorabilia experience under his belt. Not only has he been a hound extraordinaire—methodically acquiring myriad baseball signatures by mail and in person at every possible opportunity—but he has put meticulous care into condition, preservation and exclusivity. Numerous autograph examples in the collection herald obscure yet important events, and our consignor’s pedantic attention to historical detail and content threads its way through the entire assembly. Click here to view The Lake Shore Drive Autograph Collection.

The Hobby’s Best Bats in Store for You (Lots 1370–1395)—Impressive Store Model Bat Collection
Back in the early 1990s, our consignor got his start with Ruth, Cobb, and Wagner, plus Lou Gehrig and Joe Jackson. At that time, the hunt was relatively easy, if labor-intensive. He put out his feelers, built relationships, and scoured eBay, where there was a growing niche of store models. Before long, he’d earned a reputation for scrupulous standards and fervid devotion. Ruth bats proved the most accessible, while Honus Wagner and Joe Jackson were practically impossible to find. Eventually, our consignor exhausted the existing supply of those 5 icons and branched out to less-heralded Hall of Famers like Hack Wilson, Rogers Hornsby, Tris Speaker and Bill Dickey. Then he expanded beyond H&B to encompass Spalding, Reach, obscure companies, even homemade folk-art-type bats.

Over the next several auctions, Legendary has the unique privilege of offering the world’s finest store-model-bat collection. Indeed, if there was ever a chance to make a big splash in the genre by buying up a giant batch of the hobby’s premier survivors in one fell swoop, then NOW is that time and that golden opportunity. It is no overstatement to say that, due to the cost-prohibitive nature of this endeavor in today’s market, never again will such an extraordinarily comprehensive hoard of store models be singlehandedly assembled, let alone made publicly available at one time. Click here to view this spectacular Store Model Bat collection. 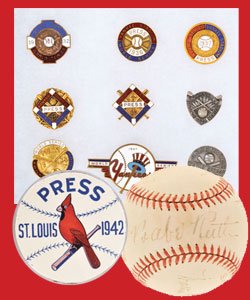 Al Lang: The Father of Florida Spring Training
What’s that? You’ve never heard of Al Lang? No need to doubt your trivia prowess or dive headlong into a Google search. Truth be told…we didn’t know who he was either. Sure, we were familiar with St. Petersburg’s Al Lang Field—preseason home of the Yankees and Cardinals during the postwar Golden Age of DiMaggio, Mantle and Musial. But as for the ball park’s namesake, we had no idea he’d cut such a monumental figure in the birth and evolution of Major League spring training.

Through foresight, enthusiasm and sheer force of will, Lang singlehandedly transformed St. Petersburg into the “shining city upon a hill” for several generations of ballplayers—among them, those preeminent pinstriped pilgrims Ruth and Gehrig. In so doing, Lang firmly established Florida as the mecca for March conditioning, and he helped give rise not only to the beloved Grapefruit League, but also to the Sunshine State’s booming tourism industry.

Al collected memorabilia throughout his time in baseball. In addition to the team-signed balls and other mementos that he gifted to fans, Al also maintained a private holding of his own favorite baseballs and pins—which Legendary Auctions has the unique opportunity to present to the bidding public.

With luck, this extraordinary offering will spur greater interest in Lang not only among baseball authors and historians, but also within the hallowed hallways of Cooperstown. And then way up yonder at the pearly gates of heaven, St. Pete’s angels can rejoice and sing: “For Al Lang Syne, my dear, for Al Lang Syne, we’ll take a cup of kindness yet, for Al Lang Syne.” Click here to read more and view The Al Lang Collection.