Bid now in Heritage Historical Auctions  October 19, 2017 Historical Manuscripts Auction.  Bid, view and register at historical.ha.com.  The personal archives of activist Norman Cousins, who dedicated his life to nuclear disarmament and world peace, offers an historic look at his role as a private citizen in bringing about the Nuclear Test Ban treaty in 1963. Never before offered at auction, his correspondences with world leaders, including several American presidents, will be offered in Heritage Auctions’ Historical Manuscripts auction on Oct. 19 in Dallas.

“The material shines a light on the immense accomplishments of this quiet hero,” said Sandra Palomino, Director of Historical Manuscripts at Heritage Auctions. “Cousins’ role behind the scenes of the negotiations of the Nuclear Test Ban Treaty cannot be overstated.” 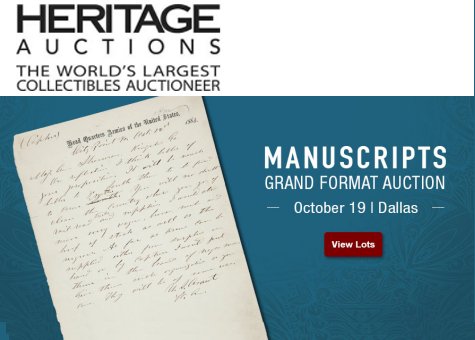 Cousins’ response to the bombing of Hiroshima was immediate. He wrote an editorial for the Saturday Review on August 6, 1945, the same day the bomb was dropped on Hiroshima. He founded organizations, and one such effort, the American-Soviet Dartmouth Conferences, brought him to the attention of the Vatican.  In early 1962, Cousins was approached by Father Felix Morlian to act as an intermediary in getting a message to the Kremlin. Cousins stayed in touch with Morlian, but the Cuban Missile Crisis in October 1962, brought new urgency. Wary of potentially violating any U.S. laws, Cousins reached out to the White House to let them know of his communications with the Vatican, at which time President Kennedy asked him to convey messages to both the Kremlin and the Vatican. Cousins flew to the Vatican and then the Kremlin in December 1962; successfully establishing back channels with the Pope, the Kremlin, and President John F. Kennedy and facilitating communications among the three world leaders.

Through Cousins, the three world leaders could quietly communicate their goals without scrutiny, which served to build trust. Although the U.S. and Soviet Union had been negotiating a treaty since the Eisenhower administration, they repeatedly stumbled when it came to the issue of on-site inspections. The Kennedy administration hit the same road block during their negotiations, but via Cousins were able to successfully assure Soviet Chairman Nikita Khrushchev that on-site inspections would not be used as an opportunity for espionage.

The October auction includes an Inscribed News Wire Announcement Signed by President John F. Kennedy to Cousins dated July 23, 1963, which is expected to bring $7,500. “A more clear testament to the value of Cousins role cannot be found,” says Palomino.

Additional historically important items in the archive include:

An important telegraph from Ulysses S. Grant to Gen. William T. Sherman giving Sherman permission to destroy all of Georgia during his conquest of Confederate forces is expected to sell for at least $75,000 when it comes up for auction Oct. 19 at Heritage Auctions. The Oct. 12, 1864 letter marked a watershed event during the U.S. Civil War – a 285-mile march by roughly 60,000 soldiers designed to scare the civilians in Georgia into abandoning the Confederate cause – which went down in history as Sherman’s “March to the Sea.”

“This single military strategy had far-reaching effects, that hastened the end of the war and ensured Abraham Lincoln’s reelection,” said Sandra Palomino, Director of Historical Manuscripts at Heritage Auctions. “It was originally purchased by R. Douglas Stuart in 1932, and this is the first time it will be offered to the public since then.” 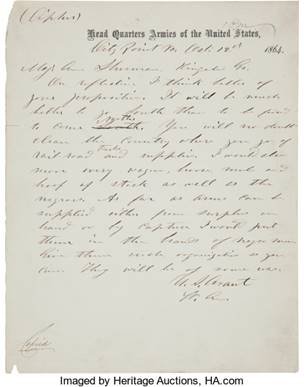 Stuart was the son of Robert Stuart, a founding partner of the Quaker Oats Company. President Eisenhower appointed Stuart as U.S. Ambassador to Canada in 1953, and he served in that post until 1956. After serving as ambassador, Stuart returned to Quaker Oats. He retired as chairman of the board in 1962. He died in 1975 at the age of 89.

Grant’s telegram authorizes Sherman to proceed with his strategy to storm Confederate-held territory with a “scorched earth” approach. In a previous letter to Grant, Sherman said, “I would infinitely prefer to make a wreck of the road and of the country from Chattanooga to Atlanta, including the latter City. Send back my wounded and worthless and with my effective Army move through Georgia smashing things to the sea.”

Sherman’s “March to the Sea,” also known as the “Savannah Campaign,” was comprised of the Army of the Tennessee, the Army of Georgia and a cavalry division, was conducted from Nov. 15 to Dec. 21, 1864, when Sherman’s forces captured the port city of Savannah, Georgia. After leaving the decimated city of Atlanta on November 16, Sherman led his troops on a bold and destructive campaign targeting both industrial and military targets, effectively crippling the Confederate’s capacity to wage war. The March to the Sea was followed by Sherman’s successful march through the Carolinas, ending April 26, 1865 with the surrender of Confederate General Joseph E. Johnston.

“Grant hesitated at first and did not initially agree with Sherman’s strategy,” Palomino said. “In the remarkable letter offered here at auction, Grant, confident in Sherman’s ability, finally relented and gave his permission to Sherman to carry out his proposed march to the sea.”

Another interesting aspect of this Oct. 12 letter are Grant’s comments concerning the arming of the black male population during Sherman’s proposed campaign. Grant had long supported Union forces taking enslaved blacks from their Confederate-supporting owners and enlisting the now-freed men to serve in the Union Army as soldiers from the time of Lincoln’s Jan. 1, 1863 Emancipation Proclamation.

“This is one of the most significant Ulysses S. Grant letters to be offered on the market in recent memory,” Palomino said, “the communication that resulted in one of the most critical military operations of the Civil War. It greatly exemplifies the entire Stuart collection featured in this auction; it makes clear Grant’s humanity in bearing the weight of making such a tremendous decision.”