Bid now in Heritage Auctions March 7 Rare Books Auction, ending March 7, 2018. There are lots of items slated for the auction block. As always, we try to offer a diverse group of material so that the largest assortment of collectors possible can participate.  Bid, view and register at historical.ha.com.

Inscribed First Edition of The Great Gatsby May Bring $100,000 at Heritage Auctions in New York

A Signed and Inscribed First Edition of F. Scott Fitzgerald’s The Great Gatsby may sell for as much as $100,000 in Heritage Auctions’ Rare Book Auction March 7 in New York. Signed, modern first editions are among the auction’s 600 lots, many from private collections, including a rare Inscribed Presentation Copy of J. D. Salinger’s The Catcher in the Rye (est. $20,000). 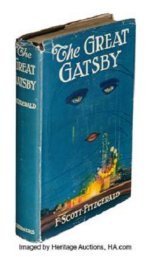 “‘Signed, first editions’ is the theme of this season’s auction,” said James Gannon, Director of Rare Books at Heritage. “We have the great fortune to offer many of the 20th century’s greatest novels signed by their authors. Nearly all come from private collections not seen at auction in decades.”

James C. Seacrest, a Lincoln, Nebraska, publisher and philanthropist, assembled the largest collection featured in the auction. Estimated to bring more than $440,000, all proceeds from the Seacrest Collection will be donated to charity, according to a family representative.

The Seacrest Collection features the near fine, 1925 copy of The Great Gatsby, inscribed by Fitzgerald in 1939 for Tatnall Brown, a banker and former Dean of Haverford College. “The inscription reads ‘For Tatnall Brown / from one, who / is flattered at / being remembered / F Scott Fitzgerald / Hollywood, 1939,’ which reflects Fitzgerald’s deep and well-documented concern about his legacy as a novelist,” Gannon said.

Additional signed modern editions from the Seacrest Collection also include copies of On the Road by Jack Kerouac (est. $8,000) and Vladimir Nabokov’s 1955 First Edition of Lolita (est. $4,000). Signed tomes by U.S. Presidents include Crusade in Europe by Dwight D. Eisenhower (est. $5,000) and a first edition of Whither Bound? by Franklin D. Roosevelt – an association copy inscribed by Roosevelt to his youngest son (est. $5,000).

Seacrest also sourced important volumes by Charles Dickens, including a signed and dated First Edition, Second Issue, of The Life and Adventures of Nicholas Nickleby (est. $25,000) and an 1843 First Edition of A Christmas Carol, which includes an envelope addressed in Dickens’ hand and signed by him (est. $15,000). The auction also offers additional copies of Dickens’ classics from the Collection of Daniel J. King, such as a set of Christmas books, including a third-person autograph note by the author (est. $15,000) and an unsigned, First Edition, first issue, of A Christmas Carol (est. $10,000).

The auction also features the first time Heritage has presented a significant grouping of Continental, Irish and Latin American literature. The Continental section is anchored by The Marylin R. Duff Collection, featuring an important signed Holograph Manuscript by Jorge Luis Borges, circa 1926 (est. $20,000), Louis-Ferdinand Céline’s Voyage au bout de la nuit; a presentation copy of Anna Karenina, inscribed by author Leo Tolstoy (est. $10,000) and an inscribed copy of Unzeitgemässe Betrachtungen by Friedrich Nietzsche (est. $30,000). Rounding out the auction’s Continental, Irish and Latin American section offerings is one of just 150 first edition copies of Ulysses by James Joyce (est. $12,500). The section also presents what is considered among the most significant association copies in all of Latin American literature: A 1969 first edition of Pablo Neruda’s Fin de Mundo (est. $12,000), inscribed by the author for Chilean President Salvador Allende. 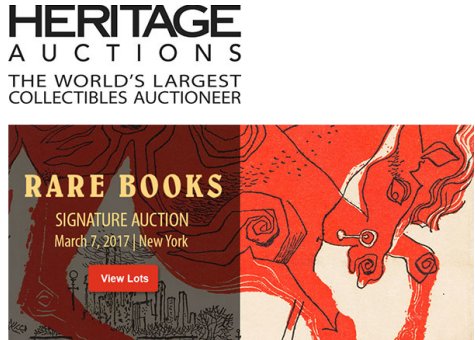