On offer are sculptures, paintings, illustrations and mixed media works curated by CBS Consumer Products for the exhibit’s 2016-17 global tour. Originally debuting at San Diego Comic-Con in July 2016, “Star Trek: 50 Artists. 50 Years.” gained international acclaim with over 100,000 fans attending the exhibition during 11 stops through North America, Europe and the Middle East. The artwork imagery has also appeared on numerous officially licensed Star Trek merchandise including a hardcover art book of the same name. 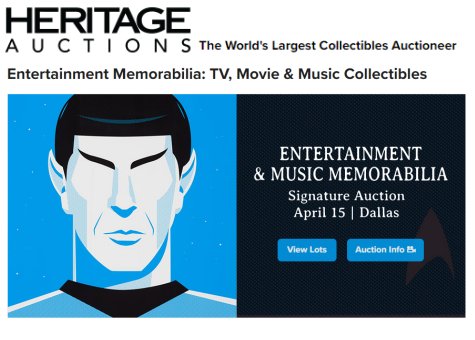 The exhibit’s fine art paintings and photography in the auction include:

Illustrations paying tribute to the franchise’s fan-favorite characters include works by artists:

“This is the first time a body of work like this has ever been offered at auction at one time,” said Giles Moon, an Entertainment Consignment Director at Heritage Auctions. “The artworks are marvelous and truly capture how Star Trek’s television programs and films have influenced generations of artists around the world.”

Star Trek celebrated its 50th anniversary in 2016. Born from the mind of Gene Roddenberry, the original Star Trek series debuted Sept. 8, 1966, and aired for three seasons. The program launched William Shatner and Nimoy into superstardom and spawned six more television series and 13 feature films spanning the course of half a century.