It’s been well over a decade since a PSA Mint 9 example of the hobby’s most celebrated post-war trading card was offered at auction, but the inaugural Heritage’s spring Sports Card Auction, closing April 19-20, will tempt elite collectors with a 1952 Topps example of Mickey Mantle’s coveted rookie. It is estimated at $3,500,000+, and it is expected to compete for the most expensive price ever paid at auction for a baseball card ($3.12 Million) as it leads the nearly 2,000-lot event.

“Since the last auction offering of a PSA Mint 9 example over ten years ago, the 1952 Topps Mantle rookie card has exploded in popularity and identified itself as the 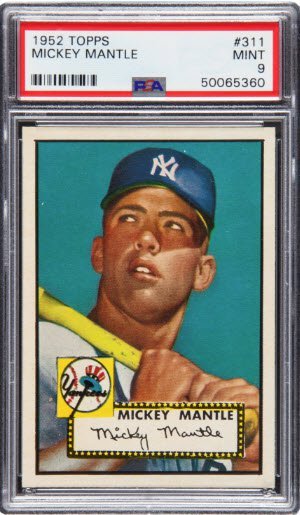 hobby’s ultimate blue chip stock,” said Chris Ivy, Director of Sports Auctions at Heritage. In addition to the mint 1952 Topps example, the auction also includes a mint example of Mantle’s sought after 1951 Bowman rookie card, and Ivy continues, “There are fewer than ten cards equal or superior to each of these examples in the PSA population, so the gulf between supply and demand is truly massive.”

The recent discovery of a long-forgotten cigar box in a Connecticut attic supplies the auction with a thrilling assembly of 19th  century cardboard, including an exceedingly a rare 1888 N338-2 S.F. Hess Mickey Welch, two representations of 2000 Hall of Fame inductee Bid McPhee and 10 cards portraying players with previously uncataloged teams (including two for Buck Ewing).

Another single-owner consignment is offered under the title, “The Windy City Collection,” featuring 36 graded sets, which reside almost exclusively within the top five on the PSA Registry, and more than 450 single-card lots. There are high-grade 1916 M101-5 Sporting News representations for both Babe Ruth and “Shoeless Joe” Jackson, a 1951 Bowman Mickey Mantle graded PSA Mint 9, the No. 1 1895 N310 Mayo Cut Plug Boxers Complete Set on the SGC registry, and much more.

Heritage’s spring Sports Card Auction is open for bidding and will close in Extended Bidding format April 19 and 20 at 10 p.m. CST.