Heritage Sports offers an amazing selection of Sports Memorabilia in there current auction that runs through October 18-19, 2018.  Bid, view and register for the auction at sports.ha.com.

It’s been nearly two decades since Yale end Larry Kelley’s 1936 Heisman Trophy commanded $328,110 at auction, and experts expect that the only other example earned by a student athlete of that prestigious college – bestowed to Yale teammate Clint Frank – will eclipse that figure in Heritage Auctions’ Oct. 18-19 Sports Memorabilia Auction. Frank’s recognition as the outstanding college football player of 1937 marked the first of just three times that a college claimed back-to-back Heismans, and the second of just three earned by an Ivy Leaguer.

“It’s not just the most coveted award in college football,” noted Chris Ivy, Director of Sports Auctions at Heritage, “but also the Holy Grail of football collectibles. Certainly it’s tied for the most important piece of Yale football memorabilia that exists.”

In the spirit of the times, Frank was a two-way player, an elusive ball-carrier on offense and a punishing safety on defense despite a host of injuries and severe near-sightedness. The fledgling National Football League drafted Frank upon his graduation, but he opted for a highly successful career in advertising, which would allow him to dedicate his retirement to a wide array of philanthropic endeavors.

Frank’s family has consigned the trophy to auction.

This auction is now open for bidding and will close in Extended Bidding format at 10 p.m. Central time Oct. 18 on HA.com/Sports. 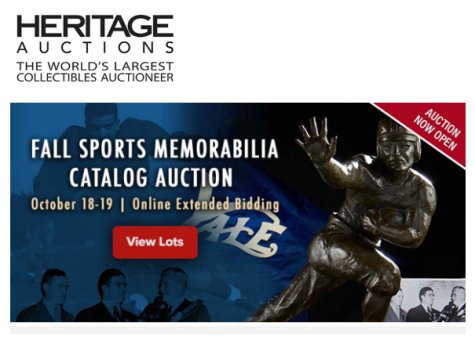