Julien’s Auctions, the world’s premier sports and entertainment auction house, announces the exclusive auction of Property From The Collection of Elgin Baylor, the eleven time NBA ALL-STAR , Basketball Hall of Fame inductee and L.A. Lakers Legend. A collection of memorabilia, awards and personal property is being offered at auction with bidding now open and concluding on Friday, May 31st, 2013.

The legendary Baylor, is one of the NBA’s 50 greatest players of all time and was also the 1958 NBA #1 draft pick, 1959 NBA Rookie of the Year, 11-time NBA All-Star and 1977 NBA Hall of Fame Inductee. This exclusive auction event offers an incredible opportunity for fans, collectors, museums and investors alike to celebrate the career of one of the greatest players to ever grace a basketball court.

With a career spanning fourteen seasons, His style of play set the stage for players like Dr. J and Michael Jordan. Baylor was the first player who took the game off the floor with powerful, high-flying, acrobatic and ballet-like moves never before seen in the game. Bob Short, owner of the Minneapolis Lakers at the time of Baylor’s play has been quoted as stating that the team would have gone bankrupt without him.

Baylor’s exclusive collection features a wide array of memorabilia from every stage of his career. From his beginnings at Spingarn High School in Washington D.C., through his 1977 NBA Hall of Fame induction, into his post-playing career as an NBA coach and being named 2006 NBA Executive of the Year. This is the first time property from Elgin Baylor’s personal collection has been offered for auction.

Highlights from the auction include Baylor’s 1959 NBA All-Star Game MVP Trophy, Baylor’s 1971-1972 Los Angeles Lakers NBA Championship Ring and a number of items from Baylor’s professional career including LA Lakers game-worn warm-ups. Baylor’s rare Lakers rookie-year shorts that feature the uniform number 14 which was issued to him after he was drafted by the Lakers, and before he officially changed to his familiar number 22 will also be offered. Baylor’s #22 jersey is forever immortalized after it was retired by the Los Angeles Lakers on November 9, 1983, now marked by the banner that displays his name and number hanging from the rafters of The Staples Center.

One of the more unique items in the auction will be a pair of Baylor’s Adidas game worn shoes. The shoes were taken without 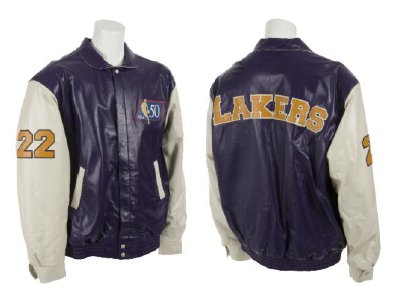 Baylor’s knowledge, bronzed, and presented to him at a talk show appearance.

“I’ve been blessed with a tremendous career and amazing fans throughout my entire life both on and off the court,” said Elgin Baylor. “Now it’s time to share some of these historic items with those fans and collectors who want to celebrate with me as time goes on.” 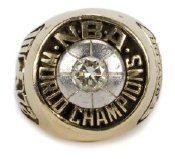 The auction will also include property from Baylor’s high school and college careers. With numerous trophies and awards from Baylor’s playing days at Joel Elias Spingarn High School in Washington, D.C., through to Baylor’s triumphant charge to the NCAA National Championship game in 1958 as a member of the Seattle University Chieftains (now Redhawks), including Baylor’s 1958 Chuck Taylor All-American Certificate. Also included are autographed items including photographs, basketballs and jerseys. Many iconic NBA players and sports heroes are among Baylor’s friends. The auction will include signed items from Michael Jordan, Charles Barkley, Karl Malone, John Stockton, David Robinson and Clyde Drexler.

From his beginning’s as a three-time All City teenage basketball player at Phelps and Singarn high school’s in Washington, D.C., to his storied career inside the NBA’s greatest arenas, Elgin .

Baylor has let his actions on the basketball court speak for themselves, resulting in a career and legacy of incredible and astounding achievements.All of 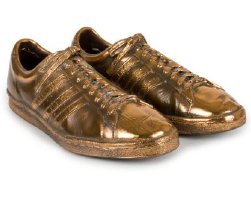 Fans can get a first look at the Elgin Baylor Collection this week at the Long Beach Expo at the Long Beach Convention Center. Hall A100 South Pine Avenue, Booth # 1248 & 1250. The show is open from Thursday February 7th at 10am through Saturday, February 9th, 2013 at 10am.

Property From The Collection of Elgin Baylor:

Registering to Bid Registration is required to bid in this live auction and can be done in person at the exhibition and auction, or online before the sale at the JuliensAuctions.com Registration page to bid by phone, proxy or in person, or online at JuliensLive.com to bid live online, or by calling (310) 836-1818.

Placing Bids There are four ways to bid in this sale:
1. Bid through Julien’s Auctions Online Live in Real Time at JuliensLive.com.
2. Place bids in the room by attending the auction.
3. Bid over the telephone through an auction house representative, who sits in the room and conveys the bid to the auctioneer.
4. Enter Absentee bids. Absentee bid forms are included in the back of each catalogue, and are also available by calling Julien’s Auctions or online at www.juliensauctions.com.

ABOUT JULIEN’S AUCTIONS: With expertise specializing in entertainment memorabilia, Julien’s Auctions has quickly established itself as the premier auction house in high profile celebrity and entertainment auctions. Julien’s Auctions presents exciting, professionally managed and extremely successful auctions with full color high quality auction catalogues unlike any other auction company. Previous auctions include the collections of Cher, U2, Barbara Streisand, the estate of Marilyn Monroe and many more. Official website is www.juliensauctions.com.