Among the more than 1,000 lots featured in Heritage Auction’s Feb. 27-28 Winter Platinum Night Sports Auction, one is certain to draw the attention of the impartial or uninitiated: the 1909 T206 Sweet Caporal Honus Wagner. Or, as it’s often called, The Card.

This slice of cardboard, graded Authentic by SGC, is The Holy Grail of baseball cards, one of the few collectibles in any category to merit the well-worn, oft-used appellation. It was the Alpha and Omega of the card-collecting hobby long before it became a business. The one about which books have been written and documentaries filmed. A deepfelt passion for many; for others, a lifelong pursuit.

It is not the scarcest card in the world: Professional Sports Authenticator notes there are a handful of 19th century offerings that exist only in the handfuls, while there are estimated to be 60-75 T206 Wagners in the wild. And still, more than a century later, only sketchy legends remain about why so few were made – either because Wagner adored children and abhorred cigarettes, for which these were made as advertisements and enticements, or because he wanted more money. But those are mere fables at this late date, stories told to burnish the legend of the world’s most coveted card depicting the man known as The Flying Dutchman.

The card being offered in Heritage’s Winter Platinum Night Sports Auction needs no embellishment of any kind.

This is T206 Wagner that once belonged to Joe Garagiola, the catcher who spent nine seasons as a major-leaguer before turning baseball announcer, bestselling author, two-time Today show co-host, Johnny Carson fill-in and Chrysler pitchman. He didn’t buy the Wagner, either: According to his son, to get the card Garagiola traded the uniform he wore during his final season in the sun.

A 1954 New York Giants uniform, no less, the one worn by the legendary lineup that blanked the Cleveland Indians in that year’s World Series.

“Hat, jersey, pants, socks, even the jacket he used to wear around in wintertime,” says Joe Garagiola Jr., general manager of the Arizona Diamondbacks from 1997-2005. 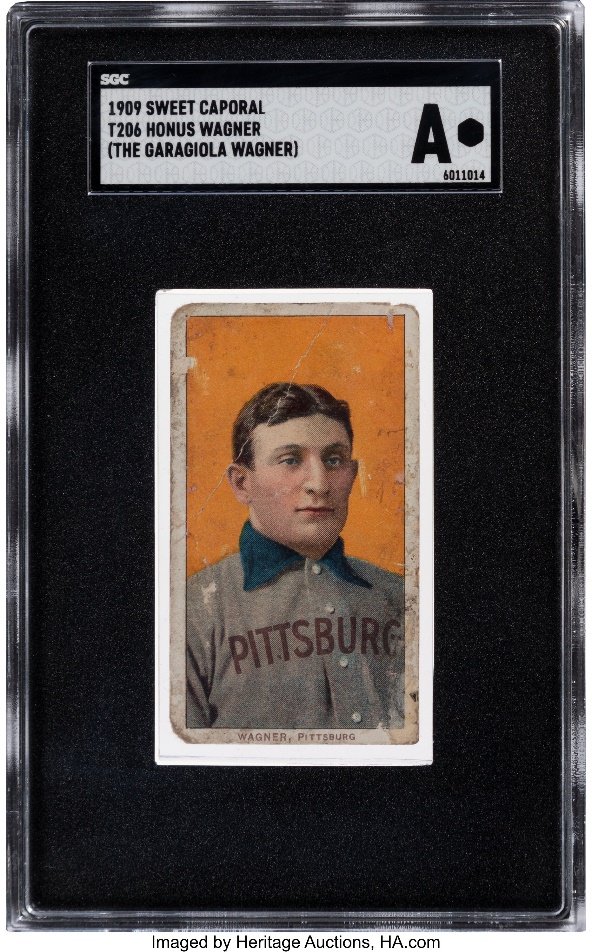 In fact, it’s very likely Joe was wearing that very uniform in the iconic photo of Willie Mays’ basket catch made during Game 1 of that World Series. That’s Garagiola in the upper-left corner, poking his head out of the Polo Grounds’ center-field clubhouse window. Mays would later sign that photo for Garagiola, congratulating him for having “the best view” of the baseball’s best play.

“And a set of Goudey baseball cards from the 1930s were also in the deal for the Wagner, if memory serves,” Joe Jr. says. “I am also very sure there was no money involved. That was not anything he ever did. That’s a very important part of the story: He had the true passion of the real collector. Dad would trade things. He would be in touch with other collectors. He worked hard his whole life and could have written checks for any of this. But he chose not to.”

It’s entirely possible those Goudey cards meant as much to Garagiola as that Giants uniform, because those shiny slices of decorated cardboard were something he coveted as a kid but could never afford. The childhood friend of neighbor Yogi Berra, Garagiola was the son of immigrants who could afford few luxuries for their St. Louis home; his dad was a brickmaker who wanted only to shelter and feed his family. At the time Goudey Gum Company’s baseball cards were the most popular and cost only a few pennies per pack; yet, they remained out of reach for young Joe.

“He often talked about how he saw other kids with those Goudey cards and wished he could get them,” Garagiola Jr. says. “So over the years he put together this complete set.”

Which he eventually traded for a single card. The Card. Garagiola’s son never asked his father, who died in the spring of 2016, why he traded an entire collection for the T206 Wagner. Perhaps because he never needed to.

“Anybody who is any kind of collector in baseball memorabilia – and even if you’re not – you know about the Wagner card,” he says. “It has a mystique to it. It was simple if you’re a collector, and he was a collector of cards: That was the card. So when the opportunity arose to own it, it was just irresistible.”

Joe Garagiola Sr., drafted by the St. Louis Cardinals when he was only 16 years old, kept very few of his own playing-days items – maybe a few gloves, says his son, and a holey Cards jersey he, too, traded away. Eventually he turned his attention to gathering the autographs of big-leaguers, even those with whom he shared a line-up card as a Cardinal, Pittsburgh Pirate, Chicago Cub and Giant. Though he played the game against and alongside the likes of Mays and Stan Musial and Jackie Robinson and Ted Williams and numerous other Hall of Famers, Garagiola was above all else a fan of the game.

“He never lost that element of hero worship,” says his son. “It came from the heart. He loved baseball – loved the game and the people in the game. He was still doing Diamondbacks games when he was 90. He had as much fun getting to the park early, doing downstairs, sitting on the bench and sitting in the manager’s office as when he started. The game, and its history, meant a lot to him.”

Which, perhaps, is what also attracted him to the T206 Wagner. Certainly, that man depicted on its front – “the rawbowned Wagner in a stiff, high-collared Pittsburgh jersey,” Michael O’Keefe and Teri Thompson wrote in 2007’s The Card – warrants the fuss made over it for decades.

There is no disputing Johannes Peter “Honus” Wagner’s prowess at the plate and on the base paths; the longtime Pittsburgh Pirate was one of the first five men inducted into the Baseball Hall of Fame in 1936. He was his generation’s Babe Ruth and Mickey Mantle rolled up into one admirable figure – so kindly a titan of the game even Ty Cobb said only “quite a foolhardy man” would have dared spike the best-ever shortstop and perennial batting champ whose number 33 was retired by the Pirates in 1956.

To trade a uniform for such a keepsake may well have been a no-brainer for the player and lover of baseball. But now Garagiola’s family seeks to part with it if only to turn over the T206 Wagner to someone who will adore it as much as he once did.

For years it has resided in a bank vault, a treasure rarely viewed and seldom visited, a keepsake under lock and key that begs to be seen again. Joe Jr. says his mother, brother, sister and he recently decided it was time to let someone else take custody of The Card.

“We’re all temporary custodians of these items,” he says. “It brought a lot of pleasure to my dad, and now it’s time for someone else to feel the same way about this Wagner. Somebody owned it before he did, and now it will move on. Yes, of course, this card has a value, a dollar amount. But it clearly has value beyond that. It certainly did for my dad.”