Legendary Auctions is coming on a consignment trip to The Philly Show in King of Prussia, PA this Friday, December 3rd through Sunday, December 5th! Contact Ron Oser at (215) 880-5416 to make an appointment in the Philadelphia area, or come see us at the show.  Legendary Auctions, a leading Sports and Americana auction house is currently taking bids for the  Bill Mastro Collection at auction. The Bill Mastro Collection was amassed by one of the collecting industry’s most widely recognized pioneers. Mastro concentrated his collecting interests on iconic pieces of Sports memorabilia that rank among the world’s most prestigious in terms of both condition and display appeal. Phone and internet bidding on the collection of more than 800 lots is now in progress and  closes on Wednesday and Thursday December 8-9th. While the Mastro Collection represents many of the greatest teams, events and players of baseball history, there can be little doubt as to the identity of Mastro’s favorite – Babe Ruth. The collection is loaded with some of the most exquisite pieces known to exist that memorialize the Sultan of Swat.  The centerpiece of the display was the historic signed handprint of Babe Ruth .  Accompanying each and every lot in the sale will be a customized Certificate of Authenticity, which will confirm that the item originated from this Legendary collection.  A few of the Mastro Collection’s more extraordinary items include:

This payroll dates from the day Babe Ruth hit his historic home run. Ruth received the check the Friday morning of September 30, 1927, and he cashed it the same day. Then he went off to work and made history. Ruth’s formal-style signature, “G.H. Ruth,” endorses the reverse atop Chase National Bank’s dated September 30 stamping. The front-side signatures are those of Yankees executives Jacob Ruppert and Ed Barrow. All three fountain-pen autographs are bold blazers. The amount, $6,595.38, represents just under 10 percent of Ruth’s annual $70,000 salary, and—based on the reference notation “In full payment of salary for season 1927″—it most likely zeroed out the balance for the year. Minimum Bid: $10,000.00.

In the July 1934 issue of Baseball Magazine, palm reader Alice Denton Jennings published an article titled “The Hand of George Herman Ruth: A Character Analysis of the Famous Babe’s Paw.” Her in-depth decoding explored such traits as finger length, finger spacing, thumb thickness and success lines, as well as superhero-sounding markers like the “star of powerful leadership,” “triangle of superior sportsmanship” and “cross of keen observation.” Jennings obtained the ink print herself, and it was then directly used as the centerpiece of the article. Ruth’s hand spans approximately 7-1/2″ inches in length from palm pad to middle fingertip, and 5-3/4″ in width from palm edge to thumb tip. His signature is the perfect personalized complement to such an intimate piece of Babe’s identity as his handprint. Minimum Bid: $10,000.00.

Of the eight West Coast games pitting the Bustin’ Babes against the Larrupin’ Lous, the most historically significant took place in Fresno on October 29th. Ruth and Gehrig arrived by train from Sacramento that morning and were greeted by thousands of fanatical Fresnans. As they had in every city so far, Ruth and Gehrig recruited local players to fill out their rosters. What gives this game such celebrated status in the annals of Ruth-Gehrig barnstorming was the participation of four Japanese ballplayers: Johnny Nakagawa, Harvey Iwata, Fred Yoshikawa and the great Kenichi Zenimura. The pint-sized Zenimura was a lightning bolt on the base paths and a savvy organizer off the field. He was born in Japan, immigrated to Hawaii, and reached the mainland in the early 1920s. Menial labor earned him a modest living but baseball was his passion, and when he was denied access to white-only teams and stadiums, Zenimura formed his own squad of fellow Japanese-Americans in Fresno. They competed against other so-called “Nisei” clubs around the state and also played exhibition games against Negro Leaguers. They even toured around Japan in 1924 and 1927. Suiting up with Ruth and Gehrig was a rare honor in these segregated times, and one they readily accepted. Ultimately, the Japanese quartet proved the difference, with Zenimura and Nakagawa hitting singles and Yoshikawa ripping a one-run double en route to a 13-3 Larrupin’ Lous victory. Minimum bid $10,000.

This monumental dazzler happens to be the one-and-only known panoramic image of its kind. It features the world champion ’15 Red Sox with their rookie phenomenon Babe Ruth. Minimum bid $10,000.

Never was there an athlete more suited for ice-cream endorsement than Babe Ruth. His legendary appetite was the reason Yankees president Jacob Ruppert instituted pinstripes—in hopes that the vertical lines might mask his star’s growing girth. In August of 1928, as part of its “Fro-joy Cone Week” promotion, the company issued six small Ruth cards, which could then be submitted by mail in exchange for a photographic premium of the Bambino batting. That same Charles Conlon image (familiar from the later ’33 Goudey set) was also artistically rendered in portrait style for this 12″-tall counter sign—the only known example in its size, and one of only two Ruth Fro-joy advertising signs in existence. As to its origins and value, this sign surfaced in the mid-1970s with the family of a former Fro-joy employee, and it last sold publicly in 2001 for almost $22,000. The sole extant counterpart—a four-foot-tall version that underwent massive restoration—reached more than $32,000 after its discovery in 2008. Minimum bid $5,000.

Of the more than 200 depictions in ’33 Goudey, only a handful were deemed worthy of two portrayals. But the larger-than-life Bambino warranted inclusion on four distinct cards: #’s 53, 144, 149 and 181. In all likelihood, Goudey was not simply promoting the set’s biggest draw, but also compensating for the dearth of Ruth’s cardboard cameos in preceding years. Hailing from arguably the most significant bubble-gum issue ever produced, this example also makes a strong case for being one of the very finest uncut sheets in our hobby. Minimum bid $5,000.

It was a perfect match: the best baseballer and the best baseball magazine. Sometime around 1927, The Sporting News put its considerable resources behind the Babe and produced this artistic die-cut cardboard advertising counter sign—of which only one other copy is known to have survived. Production quality is extremely high, with bold color tones, stylistic multi-hued fonts, and a serene full-length portrait of Ruth before an empty dugout and filled grandstand. One never knows if the opportunity to own either Ruthian rarity will arise again in the future. Minimum bid $5,000.

Other auction standouts from the Bill Mastro Collection include:

This distinguished ancestor of the counter displays seen today is a wood-framed layout of the large-size baseball premiums produced for the Turkish Trophies brand. These premiums were available to the buyer who saved the coupons accompanying those cigarettes, and a front-and-back example of the coupon is also present in the display. The coupons are overlaid by one of the featured offerings, in this case an exquisite batting-pose L1 leather of Ty Cobb. A center-strip declares, in understated white-on-green, the availability of designs “on leather, satin, and card mounts” in return for “slips” packaged with the cigarettes. The lower segment of the frame’s content features, on the left, a remarkably fresh T3 (a 5-3/4″ x 8″ “cabinet” card of Chicago’s Hall of Fame infielder Joe Tinker) and, on the right, a pristine 7″ x 9″, S81 large silk of Christy Mathewson. The dual effects of quality and permanence persist in the wood-burned “Turkish Trophies” logo-script that embellishes the frame’s topmost border. Minimum bid $10,000.

This is the ultimate tribute to Ty Cobb’s metal-toothed talisman: a Golden Sporting Shoe die-cut counter sign for Cobb-brand cleats. The fierce Tiger icon wears a 1907-1911 uniform style and demonstrates his batting stance against a baseball-diamond backdrop. A stand-alone gem, this archetypal ad would also make the perfect companion piece to that most famous photograph in baseball history—Charles Conlon’s action shot of Cobb ferociously barreling through his opponent as he slides safely into third. Minimum bid $5,000.

So universally beloved was Cleveland Indians hurler Addie Joss that when he died of meningitis in his prime, all American League games were cancelled for a day—Addie Joss Day, to be precise—and an all-star charity game was assembled to benefit Joss’s family. The photographer was Cleveland’s own Louis Van Oeyen, whose official copyright stamping appears on the reverse, along with handwritten caption notations. The sepia photo originates from the Baseball Magazine archives and is impressively clean but for normal corner wear. Minimum bid $300.

Experts at Legendary Auctions expect interest in the Bill Mastro Collection to be extremely high. “There can be no discounting Bill’s contributions to the hobby,” said Doug Allen, president of Legendary Auctions. “Bill’s eye for detail and condition was always considered unrivaled and his personal collection reflects these traits. Bill’s collection is packed with quality items in pristine condition that truly makes every item a one-of-a-kind piece for which collectors will pay a premium. The Bill Mastro Collection will be introduced this month – with the first catalogs distributed at the Chicago Sun-Times show from November 19-21, 2010 – and the hobby’s response is sure to be overwhelming.”

For more information on the auction or to pre-register for The Bill Mastro Collection auction catalog, call 708-889-9380 or go to www.legendaryauctions.com 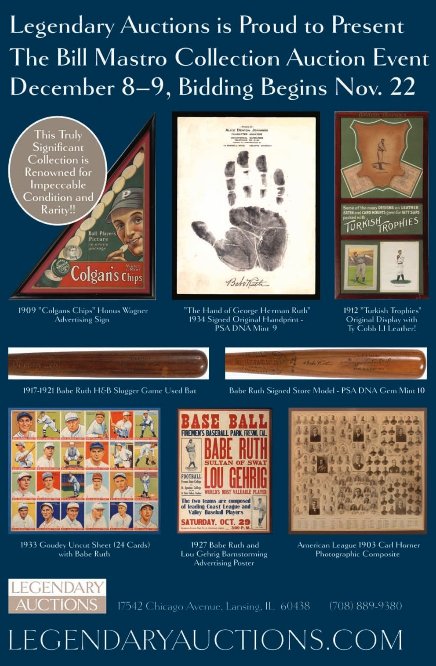